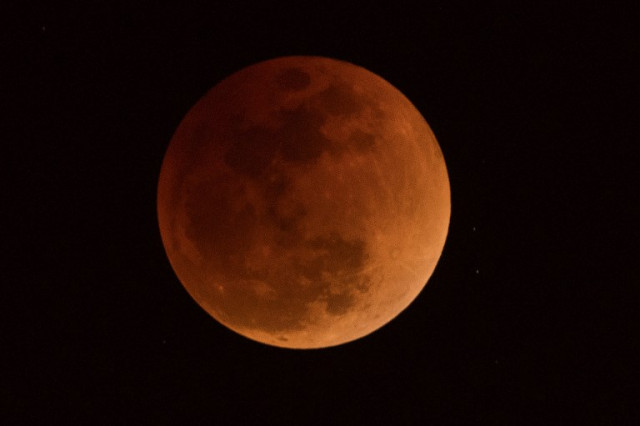 In a rare celestial display, a red moon will rise above the horizon tomorrow, July 27, in the longest total lunar eclipse seen this century.

The spectacle will be perfectly visible across all of Italy, clouds permitting. Stargazers will enjoy a rare celestial display when, on the same night, Mars will shine brighter than it has in 15 years.

The total eclipse is expected to last a record-breaking one hour and 43 minutes, seen in Italy from 21:30, when the moon enters the shadow of the Earth and turns red, until 23:13, when it will start to emerge and regain its normal appearance.

The red moon phenomenon, also called a Blood Moon or Luna Rossa, is possible because, while the moon is in total shadow, some light from the sun passes through the Earth's atmosphere and is bent toward the moon. While other colours in the spectrum are blocked and scattered by the Earth's atmosphere, red light tends to make it through easier.

According to NASA scientists: “The exact colour that the moon appears depends on the amount of dust and clouds in the atmosphere. If there are extra particles in the atmosphere, from say a recent volcanic eruption, the moon will appear a darker shade of red.”

Before and after this total eclipse phase, the Moon passes into a transitional phase called penumbra: the total duration of these three phases (penumbra, total, penumbra) varies from place to place. The total duration of the three stages of the eclipse will be longest in Santa Maria di Leuca, in the province of Lecce, Puglia (where it will last 5 hours 32 minutes and 32 seconds) and shortest in Courmayeur, Valle d'Aosta (4 hours 28 minutes and 50 seconds).

Wherever you are in Italy the view of the spectacle will all depend on the weather tomorrow night, so we’ve had a look at the forecast.

It looks like a good night for it, with mostly clear skies predicted in southern regions including Puglia, Campania and Calabria. There may be some scattered cloud anywhere north of Rome, although clear skies are predicted in Venice. Temperatures are expected to remain in the mid- to-high twenties in most parts of Italy until late tomorrow evening.

You’ll need a clear view of the horizon towards the south east to get the best possible view. That means if you're in Rome your best chance of seeing the phenomenon is to climb one of the city’s hills, such as Gianicolo, while those outside of the capital would benefit from leaving any forested areas and finding a high point.

But don't worry, even if you don't manage to find the perfect spot to see the red moon coming over the horizon, you'll still be able to get a good view once it rises in the sky.

The eclipse will be visible across Europe. It will also be seen perfectly in Africa and in Asia, and partly in Australia and in South America. It will not be visible in North America and much of the Pacific Ocean because there it will be morning or afternoon.