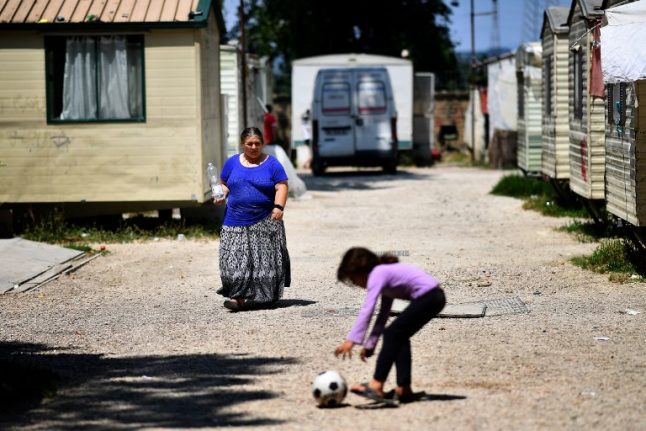 Evictions went ahead today at a large Roma camp on the outskirts of Rome, with government ministers ignoring a decision by the European Court of Human Rights to suspend the operation.

The evictions at the camp, established on a former campsite called Camping River on Rome's northern periphery, began early this morning and involved some 180 police offers.

Rome’s mayor Virginia Raggi wrote on Facebook that the camp had to be closed for hygiene reasons, adding: “It’s unacceptable to continue to finance places like these, which create ghettoes and, above all, where living conditions do not protect the rights of children, women and men. We need a ‘third way’ based on inclusion, respect for the law and protection of rights.” According to police, there is now no one left inside inside the camp. Italian media reports a large number of former residents are still outside the camp's gate this afternoon with their belongings, many saying they have nowhere to go. People are lying on mattresses or sitting next to piles of belongings by the roadside, Rai reports.

Some of the evicted residents said police used force during the eviction. “This morning they came to throw us out, they treated us like animals, there was violence, they pushed women and used pepper spray on a lady,” a man named as Florin told Rai News. “Some people left voluntarily, some fainted, the women were screaming. I’m going to get my stuff, but I don’t know where I'll go.”

Local police commander Antonio Di Maggio denied the claims, saying no force was used and threatening to sue “anyone who writes the opposite.”

“Everything went smoothly, people were invited to leave and we did not use any form of physical force,” he said in a statement. “That means we did not use handcuffs, we did not take people away by force, we did not use pepper spray or batons. We used the power of conviction to make people go, which they did.”

The European Court of Human Rights on Tuesday asked Italian authorities to suspend action until Friday and outline plans for rehousing, following an appeal by three people aided by human rights organisation Associazione 21 Luglio. City officials said that they had long been attempting to relocate the residents, and had already delayed the closure by more than a year.

Italy's far-right Interior Minister Matteo Salvini stated on Wednesday that the eviction was to go ahead despite the ruling. “I'm interested in restoring the rule of law, regardless of what letters from courts say,” Salvini said.

Matteo Orfini, president of the Italian Democratic Party, tweeted that the eviction took place “without anything being said to families about alternative solutions, without a project, without anything but the desire to grab more votes by humiliating the weak. Raggi and Salvini don’t want to solve problems, they want to spread hatred “