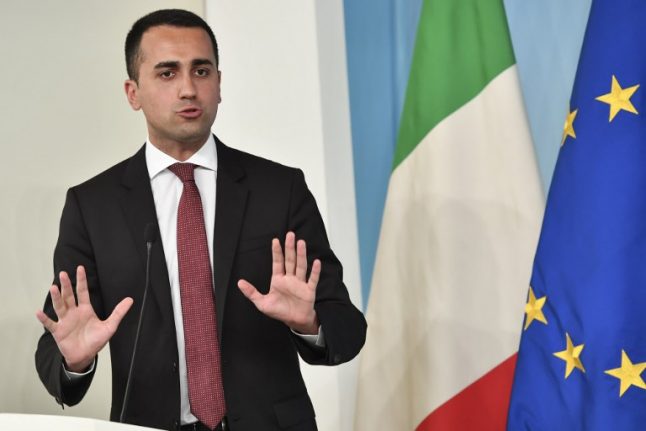 Italy’s populist government announced the cancellation of a lease yesterday on an Emirates jet intended for former Prime Minister Matteo Renzi. The aircraft, which is estimated to have cost a total of 150 million euros, has hardly ever been used.

“It's the end of the old regime,” Di Maio announced, standing in front of the airbus at Rome’s Fiumicino airport on Thursday. “This aircraft is a symbol of the arrogance of Renzi and all those who supported him.”

“This means less waste of public money, less unnecessary expenses. The government that I chair wants to give immediate signs of change.”

The move comes as a victory for Five Star. The party positions itself as anti-establishment and has governed with the nationalist League since June, has long criticised previous Italian governments for excessive spending and waste.

Italian President Giuseppe Conte wrote on Facebook: “We’re talking about 150 million euros spent for only 8 years of rental, including 20 million to reconfigure it, for an almost never-used aircraft.”

The aircraft, a full-sized passenger jet, was leased from Abu Dhabi's Etihad Airways in 2015 to replace its previous presidential plane, which was one of the smallest among G8 leaders.

The new 'Air Force One' was then lavishly refurbished and decked out with rest areas, bathrooms and conference room for former Prime Minister Matteo Renzi and his staff.

But shortly after the A340-500 aircraft arrived in Rome, a couple of snags cropped up: not only was nobody qualified to fly it, but the plane was too big to take off and land from Rome's Ciampino airport, where state aircraft are normally kept.

These problems, along with the aircraft’s high fuel consumption and maintenance costs, kept the aircraft grounded except for one state flight.

Toninelli stated that the cancellation of the lease, which is already on the table of Alitalia commissioners, will save the state 108 million Euros.

“The installments already paid amount to just over 40 million,” he said. “There will be no penalties. We’re talking about a four-engine turbofan that came out of the market in 2011 and is now obsolete.”

Renzi however insisted that the plane was not intended for him.

“When they talk about fake news like 'Renzi's plane,' it means they’re desperate: that plane was not for me but for international business flights. I've never set foot in it. Di Maio wrote a decree that will mean firing 80 thousand people: talk about that instead of fake news,” he tweeted.