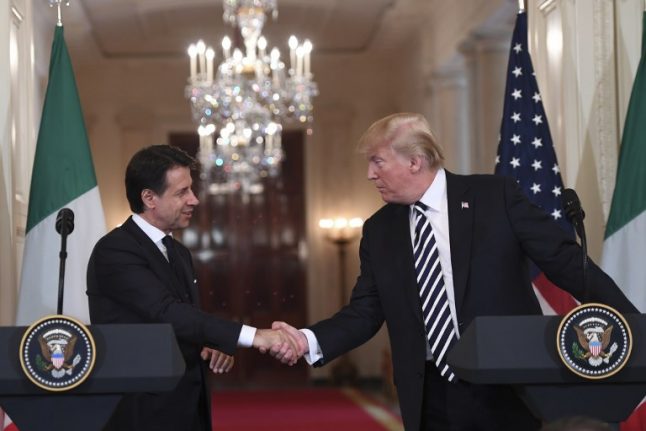 1. Conte's “tremendous victory” (that never was)

Trump opened the press conference with remarks that suggested a confused understanding of the Italian elections in March.

“Mr. Prime Minister, I want to begin by congratulating you once again on your tremendous victory in Italy. It was something that all the world was watching, and it excited the people all across Italy and, I can tell you, all across the United States, as well,” said Trump.

The 53-year-old Italian did not campaign or run in the March election, in which no party gained an outright victory. Conte was appointed as a compromise candidate for prime minister by the League and Five Star Movement after three months of political stalemate.

Trump hailed Conte, who before May was a little-known academic, as a fellow “outsider to politics”.

2. The “carrier of Trump's message”

The praise was far from one-sided, with Conte thanking Trump for the “kind invitation” to the White House and saying Italy wanted to become a “privileged interlocutor” of the US in Europe. He described the US and Italy as “almost twin countries”, both with “governments of change”.

The Italian prime minister repeatedly described his interactions with Trump as “fruitful”. In response to a question about Trump's appearances at the G7 and NATO, Conte said: “I think that all [Trump's] positions and stances — which are expressed with clarity and provide a contribution in order to review well-established positions — are more than welcome.”

This was a marked difference from many of his counterparts in Europe, including Emmanuel Macron and Angela Merkel, who have strongly criticized Trump's stance on trade tariffs and his attacks on NATO.

Regarding Trump's comments about NATO, Conte described the president's position (he has threatened to withdraw from the alliance if partners failed to meet 2 percent spending targets by 2019) as “reasonable”.

“I will be, personally, the carrier of the message, and I’ll try and make the others understand these positions,” Conte said. The most obvious common ground between the two leaders is their hardline stances on immigration.

He said he and Conte were “united in our conviction that strong nations must have strong borders,” and went on to discuss the US government’s plans for national border security and its counter-terrorism efforts.

Conte meanwhile spoke of the Italian government's “innovative approach” to “try to resolve the phenomenon of immigration” which he said was “in line with the position of President Trump.”

He stressed that the “European Union now has a responsibility” to help Italy manage migration, while Trump said he hoped more European leaders would follow Conte's example of “bold leadership”.

4. Sanctions on Russia to remain

The US and Italian governments don’t see eye to eye on sanctions against Russia, and Conte confirmed that Italy’s position was “not changing.”

He said “Sanctions against Russia are not, and cannot represent, an end”

Italy’s ruling coalition parties have stated that they want to lift sanctions on Russia, while the American administration wants to keep them in place.

Both leaders however stressed that they were open to dialogue with Russia.

Conte said “Italy is favourable to a dialogue with Russia, but Italy also considers dialogue between the United States and Russia fundamental.”

Trump spoke of his “great meeting” with Russian President Vladimir Putin last month, but said “sanctions on Russia will remain as is.”

READ ALSO: Italian minister Salvini calls for EU sanctions against Russia to be lifted by end of 2018

Trump also described the Iran nuclear deal, which he pulled the US out of in May, as “ridiculous” and a “waste of paper.”

Trump's standoff with Iran, and the sanctions that hurt Italian-Iranian commerce, are a big point of disagreement between the two countries.

Neither leader commented on the disagreement. Trump said instead that “The Prime Minister and I agree that the brutal regime in Iran must never be allowed to possess a nuclear weapon.”

5. “We'll work something out” on trade deficit

Despite several points of agreement, there were some hints of tension, notably when Trump referred to America's trade deficit with the Mediterranean nation.