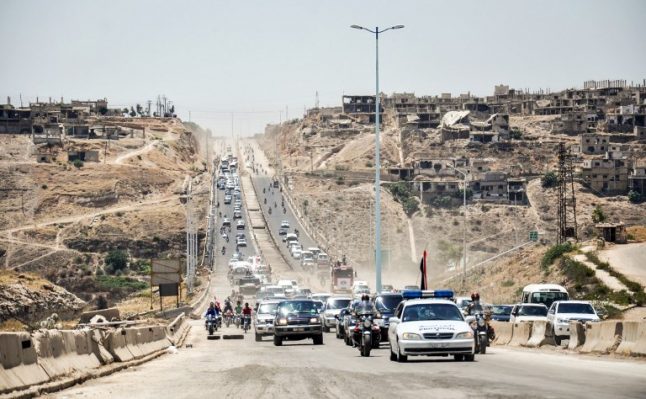 Government cars and military vehicles drive between Homs and Hama, Syria. It is not clear where the video was taken, or by which group. File photo: AFP

The two men — Japanese freelance journalist Jumpei Yasuda and Italian national Alessandro Sandrini — appear in two separate videos that are nonetheless similar in their staging and were released by the SITE group, which tracks white supremacist and jihadist organizations. SITE did not say which group was responsible for the videos.

Both men are shown kneeling in front of a wall wearing orange jumpsuits while armed men dressed head-to-toe in black stand behind them.

Sandrini was kidnapped in Turkey in October 2016 before being taken to Syria, according to reports in the Italian media. He is believed to be from Brescia and is said to be around 32 years old.

Jumpei is thought to have been abducted by the Al-Nusra Front, a former Al-Qaeda affiliate, in northern Syria in 2015. He identifies himself as Korean in the video but speaks Japanese, giving the recording date as July 25th, stating that he is in a bad situation and asking for help.

Sandrini gives a different date, July 19th, and says that it is his last request to the Italian government.

READ ALSO: What is Italy's position on Syria?