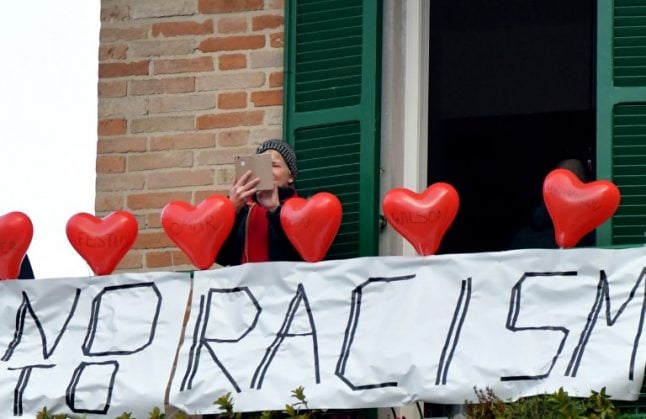 Italy’s interior minister and deputy prime minister Matteo Salvini and his supporters have been accused of inflaming racial tensions after a series of violent racist attacks reported across the country recently.

“Of course, Salvini is not responsible for the actions of these people who commit crimes, but he’s creating an environment which promotes hate,” says Dr Andrea Mammone, Lecturer in Modern European History at the Royal Holloway University of London, who has carried out extensive research into European far-right parties, nationalism, fascism and Italian history.

Mammone is among several experts who say messages from Italy’s new government are making those with racist views feel “legitimised”.

In the latest publicised attack, a young black Italian athlete was subjected to a drive-by assault in northern Italy, provoking condemnation from ministers who accused Salvini of creating a “climate of hatred”.

22-year-old discus thrower Daisy Osakue had just returned from a few months studying in the US and said she felt like she’d come back to “a different Italy”.

This was just the latest in a long list of suspected racist violent incidents since June, when the new populist government was sworn in and began its anti-immigration crackdown.

In July, a Moroccan man was killed in a village south of Rome after being chased and beaten by a group who suspected him of robbery. In Palermo, a 19-year-old Senegalese waiter was badly beaten by a gang of seven young men shouting racist insults. There was also a spate of air pistol shootings including one which injured a 14-month-old Roma girl.

Some argue that violent racist attacks like these are nothing new. One of the most shocking cases came earlier this year, before the new government was formed, when a Senegalese man was shot dead in Florence. Salvini has accused the press of “evoking” such cases and blaming his anti-migrant rhetoric “even if the number of attacks has not changed.”

But the frequency and severity of the attacks has alarmed experts and many observers. And data suggests their number has in fact risen significantly.

Official police reports recorded a total of 28 incidents of racially-motivated violence in 2016 (the most recent year with data available.)

In 2018,  there have been at least 33 violent attacks reported in the past two months alone. Police figures are not yet available, but journalist Luigi Mastrodonato has mapped over 30 racist physical assaults – an average of one every two days – from June 1st 2018, the day the new government was sworn in.

The map only shows cases that were reported to police and also caught the attention of the media, meaning it’s likely to be just a fraction of the true number.

“We know very well that we only hear about a part of what happens,” says Grazia Naletto, research coordinator for the Cronache di Ordinario Razzismo (Chronicles of Ordinary Racism) at Lunaria, an Italian NGO promoting peace and social justice.

“How many cases of racist attacks go unreported? How many crimes are there where the racist motive is ​​not challenged or recognised? We have no way of knowing,” she tells The Local. “But the numerous cases of physical violence these days worry us a lot.”

The lack of a coordinated database of hate crimes in Italy makes it hard to get the full picture.

Experts agree that the current political climate is fuelling intolerance, in a society that’s becoming ever more polarised over the issues of migration and citizenship.

Mammone adds: “There’s someone above you that’s saying all the time that migrants and refugees need to be stopped and so on. And this is eventually exploited by people who want to commit these type of acts.”

He added that is is also “giving voice to xenophobic sentiments.” “A lot of people would not have said things for example about black people before; now they don’t feel ashamed.”

But the blame for this hostile atmosphere can’t be laid solely at the feet of the League party, or tied only to recent events. The problems we’re seeing now, Naletto explains, “are the product of a cultural, political and institutional process of polarisation – creating competition between “national” and “non-national” – which has much deeper roots.”

This “competition” is evident in talk of “new Italians”, or the children of migrant parents, who have been denied citizenship despite being born in Italy, speaking fluent Italian and living here all their lives.

READ ALSO: What does it mean to be a ‘New Italian’? The question facing a divided Italy

The problem is not new, though the current government seems to have little interest in solving it, with a proposal to give ‘new Italians’ automatic citizenship being repeatedly blocked in parliament.

And it’s not just politicians being blamed. Hate acts have increased alongside Italian media reports becoming more biased and polarized, according to the IPSOS MORI polling company.

“Various surveys show an alarming expansion of hate speech in direct parallel to instances of stereotyping and manipulative misrepresentation of foreigners in the media,” it found.

It also reported that Italy is the least well-informed country in the world with respect to immigration. A majority thinks that immigrants living in Italy make up 30% of the population (the true figure is 8%), and that Muslims represent 20% (4%).

Salvini has had little to say about the recent racist attacks, other than to deny the existence of a “racism emergency” in Italy, a suggestion he dismissed as “nonsense”.

Salvini is far from the only Italian politician making anti-immigrant statements. But he’s been singled out as the most high-profile and vocal figure after a summer of political news dominated by his hardline policies.

During the election campaign earlier this year, he was responsible for half of hundreds of online comments by political leaders and candidates that were flagged as “hateful or discriminatory” by Amnesty international.

Many of his tweets are about crimes committed by immigrants, who he claims are responsible for “about 700 crimes” a day.

Meanwhile, the interior minister talks frequently about restoring the rule of law in Italy when justifying everything from his famous port closures to the forced eviction of Roma from camps.

And yet, Italian law is “not an effective deterrent” against hate crimes, according to the most recent 2016 European Court Report (ECR).

Not unique to Italy

Despite all of this, Italy is “not necessarily” becoming more a more hostile place for foreigners, Mammone says, “but a minority of people now are much more outspoken, where they probably were not outspoken before.”

“And this is because the political climate in Italy is fundamentally supportive of hostility towards migrants.”

An increase in racially-motivated violent attacks is not a uniquely Italian problem. And there are plenty of examples of senior politicians in other countries spouting similarly divisive and inflammatory rhetoric on immigration.

The UK is a prime example after anti-immigration messages from the Leave campaign in the run-up to the Brexit vote were blamed for a record number of hate crimes, including the murder of MP Jo Cox.

The US has also seen a large increase in hate crimes, with American experts attributing this to greater “incivility” in national politics, citing policies such as President Donald Trump’s travel ban on those arriving from several majority-Muslim countries.

With Salvini looking set to continue railing against refugees here in Italy, Mammone says other ministers must challenge statements that fuel hatred.

“The rest of the government needs to do more work to stop this,” he said. “It’s coming from above.”