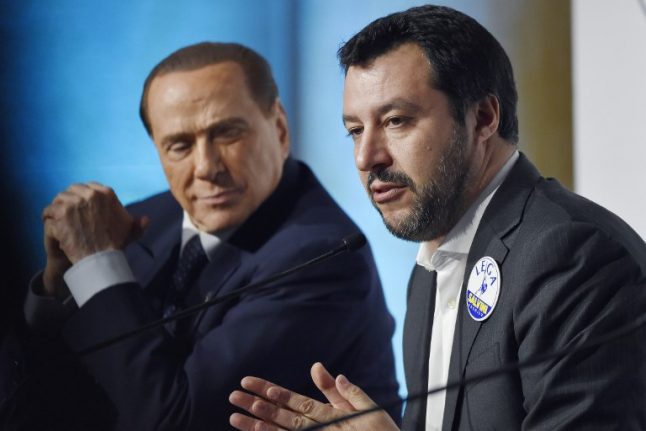 Silvio Berlusconi (L) and Matteo Salvini have disagreed over the appointment. Photo: AFP

Marcello Foa has faced opposition from the centre-left Democratic Party (PD) and in particular from media mogul and former prime minister Silvio Berlusconi's Forza Italia (FI), whose votes were decisive in shooting down his bid for the post.

Despite having his candidacy blocked, Foa, an Italian-Swiss citizen aged 55, can serve as its de facto head as the eldest member on RAI's advisory board.

“I am waiting on indications from the owner (Italy's ministry of economy and finance) and in the meantime I shall continue in full respect of the law to coordinate the workings of the board as the eldest member in the exclusive interest of the RAI's good functioning,” said Foa in a statement.

“I want to stress that in these first meetings the atmosphere at the heart of the board has been excellent,” added Foa.

The coalition government comprising the far-right League and the populist Five Star Movement (M5S), which took office just two months ago, had agreed on Foa, a staunch defender of Russian President Vladimir Putin, as their man after much discussion.

The League had welcomed his nomination as the “end of group thinking” in the media. But Berlusconi objected to not being consulted on the issue by Interior Minister Matteo Salvini of the League, saying it was a “bad sign” that a decision for such a key position was “agreed only within the government”.

The League responded by expressing displeasure at “the PD-FI axis that is trying to stop change”.

For Salvini, “Marcello Foa is someone who is well thought of, in Italy and worldwide, a free person” who he insisted would require journalists “to be objective and correct,” and in no party's pocket.

Foa, who for over two decades worked for the right-wing “Il Giornale” newspaper owned by the Berlusconi family, has publicly supported anti-vaccine theories, retweeted neo-fascists on Twitter and claimed that NGOs are operating an “immigration factory”.

In December 2016 he leant credence to a supposed, but non-existent, attempted coup d'etat against US president Donald Trump. M5S leader Luigi Di Maio said he believed the RAI head should “be elected” in the belief that supporters of a party, who essentially oppose the established political class, do not wish to see the head of the broadcasting system chosen on the basis of his age.

Di Maio said he hoped the parties would be able to agree on Foa, while suggesting an “alternative” might yet emerge.