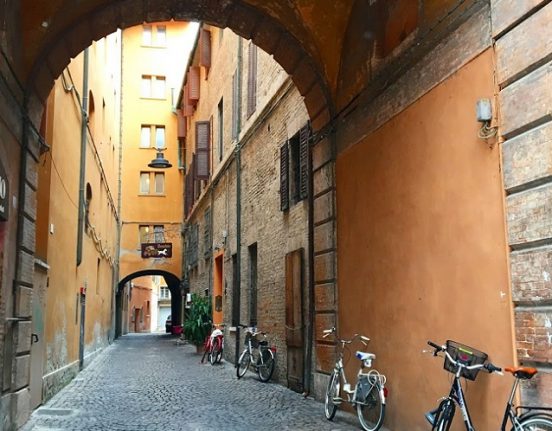 Ferrara is a beautiful university town best explored on foot or by bike, with plenty of stops for food along the way. Photo: Catherine Edwards

The perfect way to get your bearings is to take a tour of the incredibly well-preserved medieval city walls. The views change as you travel round the city, from ancient battlements to peaceful greenery.

It takes around an hour to do a full circuit, after which you can duck down the picturesque cobbled streets of the city centre, a Unesco World Heritage site. Via delle Volte is the oldest of these roadds, made beautifully Instagrammable thanks to the vaults built to link workshops and warehouses.

You can also take in the route on bike, the preferred form of transport of many locals. A wooded section of the walls. Photo: Catherine Edwards

This advice holds true wherever you are in Italy, but when in Ferrara make sure to sample as many of the local specialties as possible.

First, you're going to want to try the city's signature dish of pumpkin-stuffed ravioli, cappellacci di zucca, served either with herbs and butter or delicious meaty ragu. Mop up the sauce with the local cross-shaped variety of sourdough bread, coppia ferrarese. Alternatively, meat lovers can tuck into salama da sugo, a kind of sausage, or pasticcio ferrarese, a macaroni and meat sauce-filled pie, which might sound strange but tastes delicious.

Those with a sweet tooth won't be disappointed when they visit the local bakeries: the upmarket Leon d'Oro, the well-stocked Pasticceria Cioccolateria Chocolat and Pasticceria Dario, and brioche specialists Cornetteria Los Cornetteros are perfect spots for breakfast or an afternoon pick-me-up.

An inn with a past

With a strong claim to being the world's oldest osteria, Al Brindisi is a well-stocked wine bar that makes for a cosy spot to spend the evening. You'll be spoilt for choice but can always ask the staff to help you choose a bottle. Patrons are following in famous footsteps: 16th-century painter Titian and Renaissance mathematician Copernicus both drank and dined there. One of Italy's most impressive castles

In the Renaissance era, Ferrara was booming under the rule of the powerful Este family, who built a fortress in its centre in 1385. This was where they held elaborate parties as well as keeping prisoners in the eerie dungeon below, which makes for a sobering visit. Enter by crossing the drawbridge over the moat, and don't miss the views over the city from the Torre dei Leoni (though be aware this requires an extra fee).

If you find yourself intrigued by the Este family, there are plenty more of their villas and residences to visit across the area. Behind its simple facade, the Palazzo Schifanoia boasts stunning frescoes and other exhibits, as does the small Palazzina Marfisa d'Este.

It's probably already clear that this is a city steeped in history. Visit the art gallery at the Palazzo dei Diamanti or simply admire the fascinating design of the 15th-century building, covered in pointed marble blocks intended to look like diamonds and reflect light. The city's beautiful cathedral can be visited free of charge, and you can find interesting museums ranging from the Archaeological Museum to the Museum of the Resistance.

And Ferrara also has a strong Jewish history, albeit a tragic one. It was one of the first Italian cities to welcome Jews and allow them to practice their faith in Renaissance times, but most of the city's Jewish population were deported to concentration camps during the Second World War and the local Jewish community remains small today. If you want to learn more about this era, Ferrara writer Giorgio Bassani's book The Garden of the Finzi-Continis offers a beautiful portrait of Ferrara and a sad part of its history.

The garden of the novel's title doesn't exist in real life, but visitors can explore the city's former ghetto in the area including Via Mazzini, Via Vittoria and Via Vignatagliata, where you'll also find Ferrara's synagogue and, nearby, the newly opened Jewish Museum.

The when, what and where of Ferrara's markets changes all the time, but the chances are at least one of these events, filling  the squares with delicious aromas and providing ample opportunity for souvenir shopping, will be taking place during your visit. There's a Friday farmers' market, an antiques market taking place every weekend, an organic food market on alternate Sundays, and a craft market every third weekend of the month, and that's just for starters. A summer market by the cathedral. Photo: Catherine Edwards

There are also a range of special one-off events that crop up throughout the year. Every August, you can also enjoy the annual Buskers' Festival which sees street performers from across the world flock to Ferrara's alleyways, while the city's own palio takes place in May.