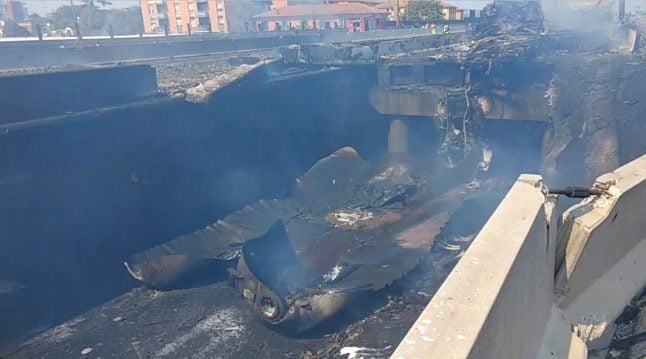 The burned-out tanker at the scene of the explosion in Bologna. Photo: Italian fire service

A tanker truck exploded on a motorway just outside the northern Italian city of Bologna on Monday afternoon engulfing the area in a fireball, according to the Italian fire service, killing one person and leaving around 100 injured.

The incident happened near Borgo Paginale to west of the Bologna, very close to Bologna airport, at around 2pm, the Italian fire service said.

The explosion came after a collision started a fire inside the truck, firefighters at the scene told The Local. After the explosion, fire engulfed nearby shops including a Peugeot car showroom, and part of the motorway bridge the truck was on has now collapsed, firefighters said. Images from the fire service show a huge column of black smoke billowing from the wreckage of the truck on the city's ring road, and showed burning cars in an adjacent car park.

One video filmed by a motorist circulating on Twitter shows the moment the tanker exploded, when a black plume of smoke was suddenly swept away by a powerful ball of flame that takes over the entire horizon.

Correction: An earlier version of this article stated that “at least three people were killed” in the incident. Only one person had been reported killed as of Tuesday morning, and the article has been updated to reflect that.