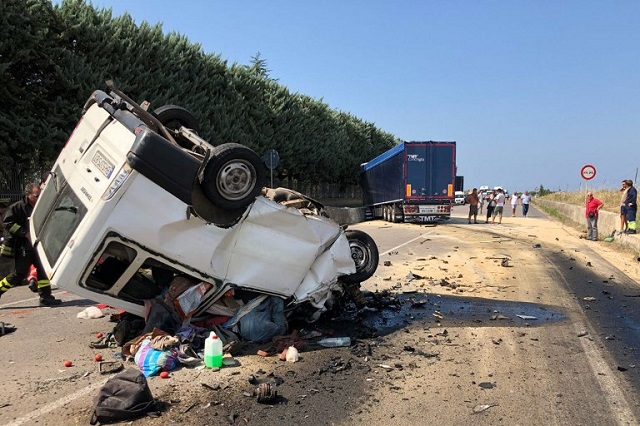 A van crashed into a truck, killing 12 migrant workers on Monday. Photo: Controluce/AFP

Both crashes took place near the city of Foggia in the Puglia region, with 12 people — all non-EU citizens — killed in a crash on Monday, the Italian fire service said.

Italian media reported that the workers were being taken back to their makeshift homes after a day's work when their van slammed head-on into a lorry transporting harvested tomatoes.

On Saturday, four African farm workers were killed and four others seriously injured in another collision with a tomato truck.

Every summer thousands of labourers from around Europe and Africa work in the area picking tomatoes under the blazing sun. Although most of those working in the fields in Italy have regular papers, rarely do they receive the benefits and salaries required by law and many live in squalid conditions.

They are often at the mercy of day labourer recruiters — sometimes linked to organized crime — who operate as intermediaries and collect a portion of the workers' pay.

Otherwise, the workers are forced to organize themselves independently, coming to work by bicycle or in dilapidated and overcrowded vehicles. For years, unions and associations that help migrant workers have called for a public transport system to be created around Foggia for the peak harvest season.

READ ALSO: Meet the student who lifted the lid on Italy's modern slavery Firefighters working at the site of the crash. Photo: Controluce/AFP

The Puglia region has now budgeted for such a system, governor Michele Emiliano said on Monday, but he added that cooperation and transparency from the farms was crucial. Farmers in the region are also struggling, with large retailers forcing down the price of produce.

Labour minister Luigi Di Maio, who is also co-deputy prime minster and the leader of the anti-establishment Five Star Movement that governs with the anti-migrant League, promised on Monday to increase the number of inspectors in the region.

He called the current situation “a shameful system that exploits the desperation of people willing to do anything to work”.

Prime Minister Giuseppe Conte said he would travel to Foggia on Tuesday. Dozens of African agricultural workers living in one of the area's shanty towns decided to go on strike on Wednesday following Saturday's accident, the representative of the USB union, Aboubakar Soumahoro, told AFP.

“At dawn, the farm workers will march from the countryside to Foggia, in order to claim dignified working conditions,” he said.

The International Organization for Migration commented that despite efforts by institutions and civil society to fight against exploitation, “each summer we find ourselves needing to comment on the death of Italian and foreign workers in the agri-food sector”.

The archbishop of Foggia, Vincenzo Pelvi, also weighed in on the accidents saying “we must not, we cannot remain indifferent before the tragic deaths of our brothers”.

He called for a mass to be held Monday evening at the cathedral to pray for the 16 victims of the two accidents and for the recovery of the injured.