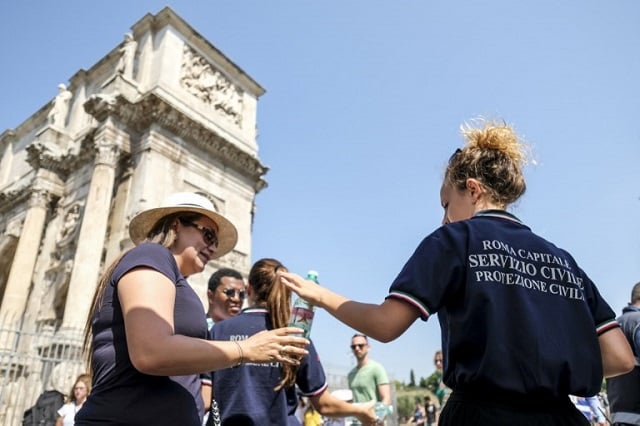 Members of the Department of Civil Protection distribute water bottles in Rome, one of the cities on red alert. Photo: Andreas Solaro/AFP

Authorities believe that the deaths of around ten people in the Ligurian region since Saturday were at least partially caused by the heat, according to Italian media reports.

Prosecutors have opened an investigation into the death of a 46-year-old in his home after reporting a fever, Ansa reported, while the others who died were elderly, aged between 80 and 85 with pre-existing health conditions.

Italy's Civil Protection Department warned residents of the area to take precautions including staying inside during the hottest part of the day and regularly drinking water. They also said social services would give  extraassistance to some of the vulnerable groups in society, including the elderly, who were also invited to use air-conditioned social centres or public libraries to keep cool.

Genoa was one of ten cities on a 'red' or 'level 1' alert for high risk of heat-related health risks on Tuesday, according to a Ministry of Health bulletin. High temperatures were compounded by high humidity levels in the area, making the city feel even hotter than it was with perceived temperatures of close to 40C.

The red alerts were in place in all ten affected cities — Bologna, Bolzano, Brescia, Florence, Genoa, Milan Perugia, Trieste, Venice and Verona — until at least Thursday, and will also apply to Rome from Wednesday and Turin from Thursday onwards.

Many other cities in the country were placed on an orange or level 2 alert. The difference between the two is that while both mean the heat poses a risk to health, in 'level 3' conditions, even healthy and active members of the population are likely to be affected, while during an orange alert, it is predominantly vulnerable groups such as children and the elderly who are at risk.

The government has set up a dedicated helpline, reachable by dialling 1500 in Italy, to offer advice on coping with the hot weather as well as information on healthcare services.