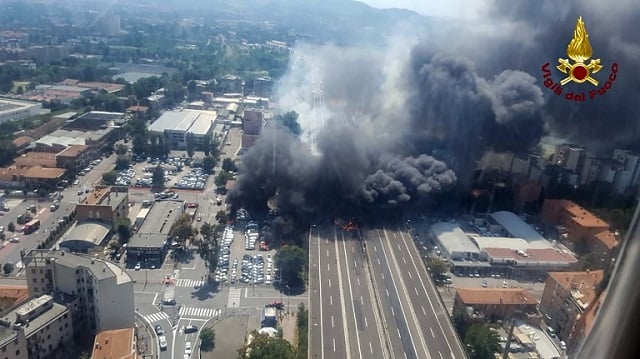 A tanker truck exploded after a collision with another truck on Monday afternoon, sending a fireball flying across a busy motorway.

It took place in the Borgo Panigale area, close to Bologna airport, and the entire area was filled with flames and black smoke, with the high temperatures and heavy debris destroying cars at a nearby dealership and smashing windows of nearby buildings.

“I was here (at a nearby restaurant) for work… at a certain point we heard a violent blast, i thought it was a terrorist attack,” Marco Rosadini, whose car was trapped under the flyover, told the daily La Repubblica. “After the explosion the roof of the restaurant started to collapse. I looked outside and I felt like I was looking at a wall of fire.”

The Italian police video below, which may be upsetting to some viewers, shows the explosion as it happened.

The images of the dynamics of the serious incident which involved a vehicle transporting flammablle substances. Investigation underway.

READ ALSO: Italy's firefighters crowned the best in the world

One person has been confirmed dead and there are at least 100 injured, according to Bologna newspaper Il Resto del Carlino on Tuesday morning. Italian media named the victim as 42-year-old Andrea Anzolin, reportedly the driver of the truck which exploded. This confirmation came after the Bologna prefecture had earlier said there had been two deaths.

Most of the injured suffered burns, with some hurt by pieces of debris and glass sent flying by the explosion. Several were members of Italy's emergency services, including around a dozen police officers.

Dozens of residents were evacuated from their homes overnight after the blast.

What caused the accident?

The blast was triggered when the tanker truck collided with another truck, and that caused a partial collapse of the flyover onto a road below.

Police officers told TV news channel Sky TG24 that the extremely high temperatures from the fire and the blast caused the road to collapse.

What has the response been?

Firefighters were quickly on the scene but it took nearly two hours to extinguish the fireball. A section of the A14 motorway was closed to traffic temporarily, but was reopened on Tuesday morning. The city's airport, located nearby, reported that there was no impact on air traffic or flight scheduling, but travellers departing from Bologna should allow extra time to reach the airport by road.

A video taken from a fire service helicopter as firefighters arrived to extinguish the blaze and secure the area.

Several teams of firefighters and two helicopters responded to the accident, and the Bologna prosecutor has opened an inquiry.

Prime Minister Giuseppe Conte was in Bologna on Tuesday visiting some of the most seriously injured and looking at the scene of the accident.

Transport and Infrastructure Minister Danilo Toninelli said in a tweet the government was working to find out “the whole truth about this very serious incident”.

Toninelli has also said he will look into whether the rules about transportation of dangerous materials were adhered to in this case, and whether any changes need to be made to make the roads safer.

Meanwhile, authorities were on Tuesday carrying checks on the stability of local buildings and analyzing the fumes from the explosion, though initial reports said there were “no polluting chemical agents” in the fumes.

“Bologna knows how to act and react; this is the strength of our city,” said Virginio Merola, mayor of the city which only a few days earlier had commemorated the anniversary of Italy's deadliest postwar attack, the bombing of its train station.