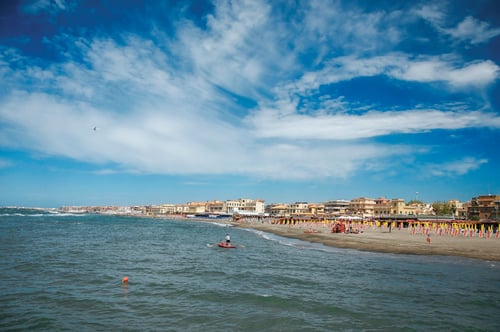 The advert, which is currently playing over RomaRadio including at subway stations across the nation’s capital, begins with the writer and actor Fabio Avaro promoting the town’s events, which include “painting exhibitions, music, street artists, children's shows, exhibitions, sports and fitness, vintage cars and much more”

A voiceover then interrupts to tell Avaro to hurry up as he only has 30 seconds, to which Avaro jokingly responds “Want do you want… I’ll give you a headbutt!”

Avaro then finishes by saying, “Ostia, a summer without “testate”. Maybe I should explain that or they might take it the wrong way…”

The word “testate”, which can mean both “headbutts” and “headlines” or “newspapers/newstations” refers to an incident last November in which a journalist for the national Italian broadcaster Rai, Daniele Piervincenzi, was hospitalised after he was headbutted live on air and had his nose broken by local mobster Roberto Spada.

Piervincenzi had been questioning Spada about his ties to the extreme far-right group CasaPound.

The case went to trial and in June Spada was sentenced to six years in prison for the attack.

Avaro, who is from Ostia and authored the advert as well as performing it, said it was a light-hearted joke in keeping with the spirit of the Roman summer.

The advert was also defended by Ostia district council president Giuliana Di Pillo of the Five Star Movement, who commissioned and funded the piece.

“We had no intention of belittling a very serious episode,” she said. “I believe that honest and intelligent people are able to grasp the true spirit of this initiative.”

But the advert’s critics, who cross party lines, say it’s in poor taste and have called for its removal, according to Corriere della Sera.

Many in Rome are sensitive about Ostia's reputation as a stronghold of the Roman mafia and see it as a symbol of the capital's inability to combat its mafia problem.

In 2015 the area's district council was dissolved due to mafia infiltration, and it was not re-formed until November 2017 elections, in which the Five Star Movement won a solid victory.