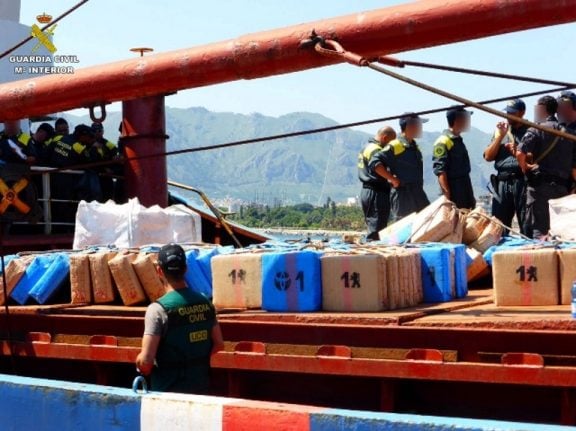 Hashish seized by the Spanish Civil Guard on a ship off the coast of Spain in September 2016. Spanish Guardia Civil / AFP

The Guardia di Finanza (GDF) finance police said they arrested the suspects early Thursday in Palermo after escorting the Panamanian rescue boat to the Sicilian capital.

They raided the boat at sea after observing suspicious activity near the north African coast, the GDF said in a statement.

The drugs were found hidden in two of the boat's diesel tanks after the police emptied all 400,000 litres (100,000 gallons) of the fuel held in the ship's 18 tanks, purportedly meant for migrant ships in distress.

The diesel was also confiscated.

Colonel Francesco Mazzotta from the Palermo branch of the GDF told AFP that the drugs were most likely destined for the European market.

He could not say whether the diesel was also being smuggled for sale on the
black market.

“The boat is one that is used to offer help to other ships in difficulty, that's why they have so much fuel storage capacity and why the crew used the tanks to hide the drugs,” Mazzotta said.

“Had they been subject to checks at sea it would have been impossible to find the drugs because it is too dangerous to empty the tanks when the boat is not docked.”

Mazzotta could not say whether the suspects had links to the Sicilian Mafia or other Italian organised crime groups.

The GDF descended on the vessel overnight on July 31 five days after it set sail from the Canary Islands port of Las Palmas.

They had noted that the on-board transmitter that allows the boat's movements to be tracked was switched off repeatedly over the course of its voyage.

Once on board, the GDF said, the captain and 10 crew members could not state the purpose of their trip or say where they were going, despite having declared Tuzla, Turkey, as their destination via the Egyptian city of Alexandria when they set off.

In Palermo, where the GDF was able to safely empty and inspect the diesel tanks, they discovered 650 jute bags containing hashish of 13 different qualities estimated to be worth between 150 million and 200 million euros.

Mazzotta said the haul was one of the “biggest yet” for the Palermo GDF as part of the international anti-drug trafficking initiative “Libeccio International”, which has seized 139 tonnes of narcotics worth more than 1.4 billion euros in the past four years.