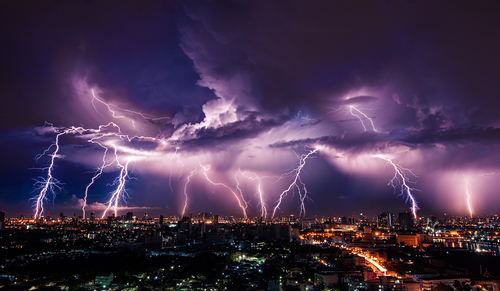 While the high temperatures and humidity that have characterised the Italian summer so far will remain in place over the weekend, a cold front coming in from the Atlantic on Monday is expected to cause frequent storms across much of the peninsula in the following days.

The clash between the incoming mass of cool air and the current high temperatures will create ideal conditions for violent thunderstorms, which could be accompanied by hail in certain areas, according to ilmeteo.

Wednesday’s festivities are expected to be met with rain and storms in Italy’s central and northern regions and in Sardinia, while the southern regions will mostly be spared the bad weather bar the occasional hilltop shower in the afternoon.

The cold front is forecast to come in from the north across the Alps, bringing with it a burst of thunderstorms that will hit the northwest and central-western Alps on Monday evening, and reach northeastern and central Italy, especially areas adjacent to the Tyrrhenian Sea, by Tuesday.

A drop in temperature should be felt throughout the country, including in the mid-south, for several days before mercury levels return to their previous highs.

Meteorologists have highlighted that the weather is currently highly unstable and forecasts are subject to frequent change, and have encouraged the public to check back at regular intervals for updates.