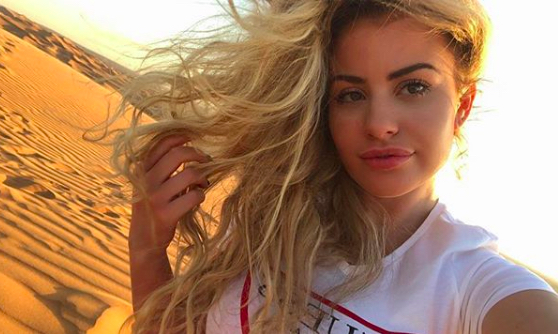 Michal Konrad Herba, who lives in the UK, is accused of taking part in the kidnapping of Ayling in Milan last July. She was then held captive for six days in a house in a remote mountain village.

His brother Lucasz Herba was sentenced to 16 years and nine months in prison by a Milan court in June for abducting Ayling and holding her against her will.

Ayling, 21, was lured to Milan on the pretence of a photoshoot.

The mother-of-one claimed she was drugged, stuffed into a suitcase, put into the boot of a car and taken to the village near Turin. Her captors allegedly planned to auction her online as a sex slave.

She was held for almost a week before Lucasz Herba drove her to Milan and released her near the British consulate. His defence said that Ayling had organised the kidnapping as a publicity stunt to boost her professional career. During the trial the accused said he had elaborated the scheme with the young mother because he was in love with her.

Investigators, who described Lucasz Herba as a “mythomaniac adventurer”, said that he had tried to extort money from Ayling, asking her manager and family for €300,000 before eventually releasing her.

Prosecutor Paolo Storari said that Ayling's version of events was “more than founded by the evidence provided,” including a message from Lucasz to Michal in which he told his brother to “clean the boot of the car so that her hair would not be found”.

Michal was extradited to Italy after being arrested in the UK last August. His trial will begin in Milan on October 24th.