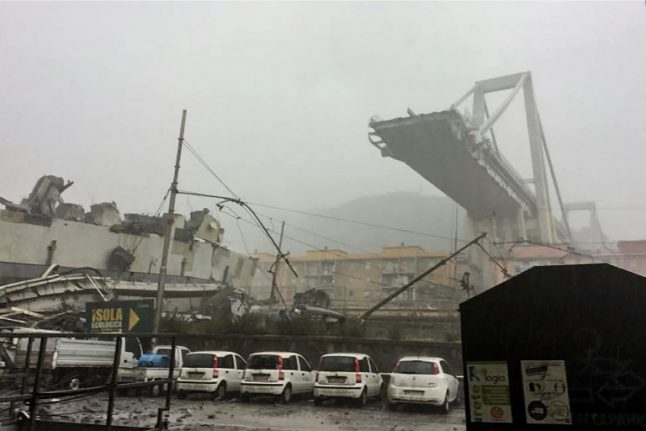 “We're currently at 38 confirmed deaths and some people missing,” Salvini, who is also co-deputy prime minister, told reporters on the sidelines of an event in the southern region of Calabria.

A vast span of the Morandi Bridge collapsed during a heavy rainstorm around noon on Tuesday, sending about 35 cars and several trucks plunging 45-metres (150 feet) onto railway tracks below.

Salvini is due to arrive soon in Genoa, on Italy's north-western coast.

Interior Minister Matteo Salvini vowed on Wednesday that those responsible would “pay, pay everything, and pay dearly”.

Italian President Sergio Mattarella said a “catastrophe” had hit Genoa and the whole of Italy.

The Italian fire service said that the bridge collapsed at around noon (1000 GMT) on Tuesday.

“The scene is truly apocalyptic, it seems like a bomb has hit this important artery which connects Piedmont and Lombardy to the eastern part of Liguria,” said La Repubblica's Matteo Pucciarelli, who was filming at the scene.

Rescuers scouring through the wreckage, strewn among shrubland and train tracks, said there were “dozens” of victims, while images from the scene showed an entire carriageway plunged to the ground.

Cars and trucks were tangled in the rubble and nearby buildings damaged by vast chunks of concrete, according to an AFP photographer at the scene.

A fire service spokesperson told AFP that the bridge had mostly fallen on rail tracks 100 metres (yards) below and that “cars and trucks” had fallen with the rubble.

“Firefighters are working together and teams of rescuers and police sniffer dogs have been mobilised,” emergency services said on Twitter.

A cell phone video taken by a bystander and obtained by La Republicca captured the moment of the collapse.

Davide Capello, who plays football for the Legino sports team, narrowly escaped death as his car fell from the bridge, he told his friend in a cell phone video shared with La Stampa.

“I went down with the bridge, I don't know what saved me,” Capello tells his friend in the video.

“The car's destroyed, but who the hell cares, I'm OK and I escaped with my legs intact,” he adds.

Patrick Villardry, a French firefighter who came from Nice to help the rescue effort, said Tuesday that the task was huge.

“The first victims have been evacuated and now we have to search under the wreckage of buildings, but there are thousands of tonnes of concrete,” he told AFP.

'Not giving up hope’

A green truck driven came to a halt just in front of a section of the Morandi motorway bridge that collapsed in Genoa on August 14, 2018. Photo: FEDERICO SCOPPA / AFP

“I'm following with the utmost apprehension what is happening in Genoa and what looks like it could be an immense tragedy,” transport and infrastructure minister Danilo Toninelli said on Twitter Tuesday as news of the bridge's collapse came through.

Italy's far-right interior minister Matteo Salvini said he was following events in Genoa “up to the minute” and thanked the emergency services for their swift response.

French President Emmanuel Macron said on Twitter that France was “by Italy's side in this tragedy and is ready to offer all necessary support”.

The cause of the disaster was not immediately clear, although weather services in the Liguria region where Genoa is situated had issued a storm warning Tuesday morning.

The national motorways body said on its website that “maintenance works were being carried out on the base of the viaduct”, adding that a crane had been moved on site to assist the work.

Shares in Italian company Atlantia, which runs much of Italy's motorway network including the collapsed stretch of the A10, plunged on the Milan stock exchange after the news.

They were down 9.7 percent at 22.48 euros in mid-afternoon, having earlier been temporarily suspended when they drop exceeded 10 percent.

45-year-old interior minister Matteo Salvini, who is also deputy prime minister and the leader of the nationalist League that governs with the anti-establishment Five Star Movement, said that he was going to find out who was responsible for the tragedy.

“I have gone over this bridge hundreds of times, and I will do everything I can to have the names of those responsible, past and present. It is unacceptable to die like that in Italy,” he said.

Eurosceptic Salvini also said that Italy needs to make massive investments in its infrastructure, much of which is dilapidated, alluding to supposed potential restrictions from the European Union should his government unleash funds.

“There is a large part of Italy that needs to be made secure, and if there are external commitments that prevent us from spending the money we need to on the safety of motorways … we will have to ask ourselves whether we continue to respect these commitments or put the safety of Italians first and foremost,” he said.

“Obviously I will choose the second option.”

Genoa is located between the sea and the mountains of northwestern Italy.

Its rugged terrain means that motorways that run through the city and the surrounding area are characterised by long viaducts and tunnels.

The Morandi viaduct, completed in 1967, overspans dozens of railway lines as well as an industrial zone housing several factories.

One factory, immediately next to one of the viaducts support columns, was virtually empty on Tuesday due to a national holiday, and seems to have sustained minimal damage.

The incident — the deadliest of its kind in Europe since 2001 — is the latest in a string of bridge collapses in Italy, a country prone to damage from seismic activity but where infrastructure generally is showing the effects of economic stagnation.

In March last year a couple were killed when a motorway overpass collapsed on their car near Ancona on the country's Adriatic coast.

A pensioner died in October 2016 when his car was crushed by a collapsing bridge over the SS36 dual carriageway between Milan and Lecco.