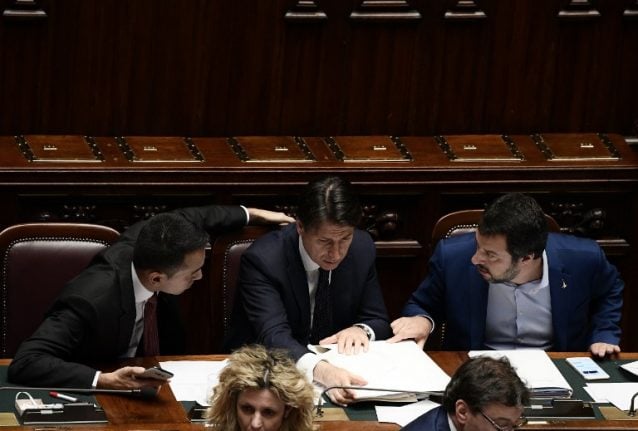 PM Giuseppe Conte and deputy PMs Luigi Di Maio and Matteo Salvini sit at the Lower House ahead of a confidence vote on the government programme in Rome on June 6, 2018. Photo: Filippo Monteforte/AFP

But to avoid paying a sizeable penalty the State would first have to demonstrate that the company committed a “serious fault”, an allegation which Autostrade strenuously denies.

Yesterday representatives of the company arrived in Genoa to present the Genoese Prefecture with all its documentation relating to the bridge, which they claim provides proof that its maintenance programme was carried out in accordance with the requirements of the law.

Atlantia, Autostrade’s holding company which trades on the Milan stock exchange, had its shares briefly suspended this morning, and when trading resumed they plummeted 25 percent in value.

A company spokesperson said it was not possible at this stage to hypothesise about the cause of the freeway’s collapse, but insisted Autostrade had met all its obligations and that it could rebuild the bridge in five months.

The cost to the Italian State of revoking the company’s concession without demonstrating that Autostrade per l’Italia was at fault could amount to between 15 and 20 billion euros.

This would be a de facto penalty for breaking the terms of its contract, taking into account the residual value of the concession that Autostrade currently holds for managing much of the country’s motorway system.

Prime Minister Giuseppe Conte said he would go ahead with revoking the contract regardless.

“We can’t wait on the justice system,” he told reporters at a press conference in Genoa, referring to the months it will likely take to conclude an investigation into the causes of the collapse.

“When you have 40 deaths, there are no penalties to pay,” he told Radio 24 in an interview.

Conte has announced a 12 month State of Emergency in Genoa and declared Saturday a national day of mourning for the victims of the disaster.