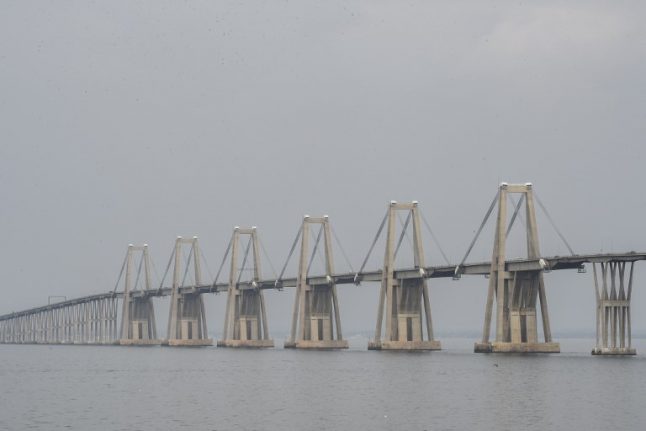 The General Rafael Urdaneta bridge in Maracaibo, Venezuela, has the same designer as that of the collapsed Morandi bridge in Genoa. Photo: Federico Parra / AFP

Designed by Italian structural engineer Riccardo Morandi, it predates by five years his 1967 bridge in Genoa that collapsed this week causing the death of 39 people.

Experts are preparing a report on the condition of the Venezuelan structure following the fire last Friday which destroyed an electricity transformer, forcing the closure of the bridge and leaving millions without power for several days.

Marcelo Monot, former director of a private engineering company in the surrounding state of Zulia, said no maintenance had been carried out on the viaduct's reinforced-concrete piers for more than two decades.

Also, “the weighing system has not worked for years, so it is not calculating the weight of the cargo vehicles, which represents a risk,” he said.

Experts from the University of Zulia, as well as engineering and construction specialists, are preparing a report on the condition of the bridge.

“We will not issue any irresponsible diagnosis … or fall into sensationalism,” Enrique Ferrer, president of the Chamber of Construction, told AFP.

He said the report would seek to “calm the population” about the 56-year-old viaduct's condition.

Venezuelans have long been concerned about the country's crumbling infrastructure after a slump in oil-prices coupled with corruption and mismanagement brought the economy to a standstill, causing chronic food and medicine shortages.

The Maracaibo bridge, inaugurated in 1962, remained closed between Friday and Monday and was only partially re-opened by Wednesday.

The incident heightened concerns over the structural integrity of the bridge and left the surrounding Maracaibo and San Francisco areas, home to four million people, without power for several days.

The government claimed the fire was caused by sabotage, a recurrent explanation offered for the repeated failures of an electricity grid ravaged by lack of maintenance and spare parts.