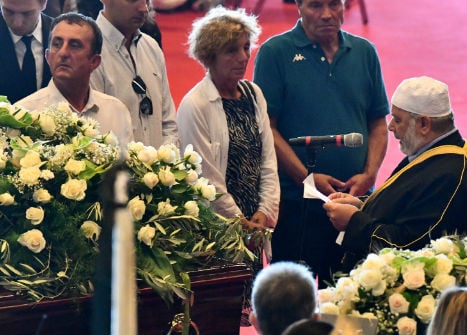 The imam's prayers and chants were met with applause. Photo: Andrea Leoni/AFP
They were among at least 38 people to have died in Tuesday's tragedy.
An imam was invited to the ceremony, a particularly poignant move in a staunchly Catholic country, where the far-right is now in power and which has seen a rise in the number of attacks against foreigners and Muslims.
He led several minutes of silent prayers — punctuated by four resonant chants of “Allahu akbar” (God is greatest) — in the presence of Italy's top dignitaries including President Sergio Mattarella and premier Giuseppe Conte.
The ceremony was also attended by Interior Minister Matteo Salvini whose far-right League party is in a ruling coalition with the anti-establishment Five Star Movement.
“The Muslim communities of Genoa, Liguria and the whole of Italy pray that peace will be with you all,” the imam said in front of thousands of mourners gathered inside the flower-filled exhibition hall where 19 coffins were lined up.
“We are close to you all,” he added as loud applause erupted inside the makeshift chapel.
“Genoa will be able to pick itself back up again. Our Genoa, which in Arabic means 'the beautiful'.”
The number of dead is expected to rise as rescuers pulled more bodies from a car shortly before the state funeral began.