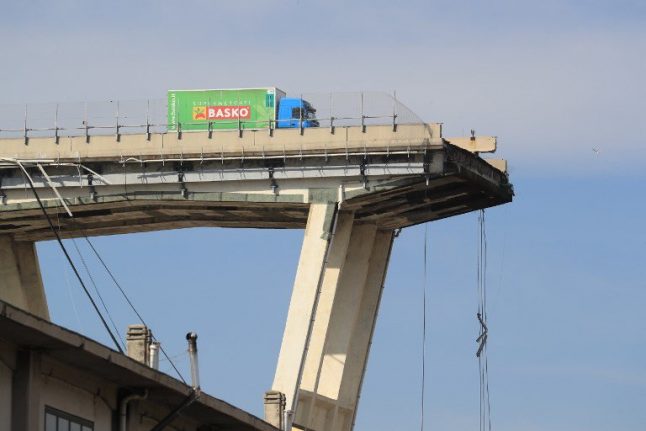 At least 43 people died, more than 600 were evacuated and 15 ended up in hospital in a critical condition, when a 200-metre portion of the A10 motorway bridge collapsed in Genoa, northern Italy on August 14th, 2018. The Italian government has declared a 12-month state of emergency in the region, with €28.5 million allocated to support those affected by the disaster.

Investigations into the collapse will look at different possible causes, including wear and tear, heavy traffic, structural flaws and other problems. The 51-year-old structure, known as “Italy’s Brooklyn Bridge”, was designed by Italian engineer Riccardo Morandi. It has been criticised by experts who have, at different times, called for serious maintenance and risk assessments to be performed. Commentators have argued that this disaster is going to be an Italian parable, a tragic illumination of the failure of a political system.

As the usual political inferno between parties and private firms rages on, the phantom threat of mafia involvement in Italian construction has resurfaced. The region of Liguria sadly scores quite high in the assessments of mafia infiltration. In the area, Calabrian mafia clans of the ‘Ndrangheta – Italy’s most powerful mafia today – have heavily invested in the construction sector, in public tenders and in the exploitation of the port of Genoa and the roads to France and to the rest of the Italian north, for the purposes of illegal trafficking.

The ‘Ndrangheta in Liguria is strong and well organised. And in the Genoa disaster, there are three potential issues linked to mafia activity. First, there are doubts over the quality of the materials used for the construction of the bridge. Back in the late 1960s, when the bridge was built, the ‘Ndrangheta (among other criminal groups) was already present in the territory, and already investing in the construction sector.

Since then, construction has become the core business of the Calabrian clans in Liguria, and in Genoa as well – a fact confirmed by anti-mafia prosecutors in one of the most recent investigations in the region, called Operation La Svolta (“the turning point”), which ran from 2014 to 2016.

There is no evidence that Società Italiana Condotte D’Acqua Spa – a construction group based in Rome, which built the Morandi bridge and coordinates construction and maintenance of several roads and railways across Italy – used sub-standard materials, or was mafia-infiltrated at the time when the bridge was built. But future investigations will seek to understand whether some of the maintenance works on the motorway and the bridge were assigned to disreputable contractors and sub-contractors. Yet further anti-mafia operations have given cause for concern; specifically Operation Bellu Lavuru in 2012, which led to trials against members of the ‘Ndrangheta involved in construction of an important road in Calabria. The operation also established recent and problematic connections between some managers of Società Italiana Condotte D’Acqua Spa and clans of the ‘Ndrangheta, during the construction of roads.

Società Italiana Condotte D’Acqua Spa holds 31 percent of the association of companies managing the construction of the Terzo Valico – a high-speed railway service between Genoa and Milan, aimed at improving movements between the port of Genoa and the railways of northern Italy and the rest of Europe.

Arrests were made in connection with the Terzo Valico project, because of ‘Ndrangheta clans’ alleged influence over sub-contracts in Liguria in 2016. And in March 2018, the president of the Società Italiana Condotte D’Acqua Spa was also arrested on a charge of corruption. He remains under house arrest, awaiting trial in November this year, and has since stepped down as president of Società Italiana Condotte D’Acqua Spa, which went into receivership at the beginning of August 2018.

Large-scale disasters can also present the mafia with opportunities to profit from crises and states of emergency: this is known in Italy as “the emergency business”. Over the past few decades, for example, mafia groups have frequently been involved in reconstruction.

When the government declares a state of emergency, it typically allocates extra funds to support the people and places affected. But in order to speed up relief efforts, the control mechanisms for reviewing bids for public contracts can be lax, which opens the door for mafia groups to become involved in the process. The mafia has also infiltrated relief systems and support funds linked, for example, to migration centres.

Given that the region of Liguria, and the city of Genoa itself, have already experienced the interference of mafia-run businesses in construction, there’s a high risk of mafia involvement in relief and reconstruction contracts in the aftermath of the Genoa bridge collapse.

As is often the case in Italy, blaming mafia infiltration for the failure of the system poses very difficult questions related not just to crime, but also to accountability, transparency, ethics and corruption in politics. Of course, it’s easy to insinuate that the mafia contributes to risks in Italian infrastructure. But these claims are difficult to prove, and can be leveraged for sensationalist speculation and political propaganda. Nevertheless, history teaches us that the influence of the mafia must be considered when trying to make sense of disasters in the region.