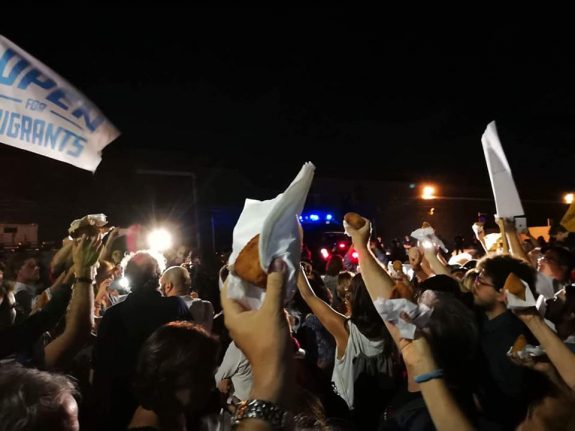 'Welcome to Catania! Have an arancino': pro-migrant demonstrators in Sicily. Photo: Silvio Laviano/Facebook No arancini were allowed onto the Diciotti, the Italian coastguard ship that has been docked in Catania since Monday night with around 150 people on board, whom the Italian government has refused permission to disembark.

Interior Minister Matteo Salvini argues that those rescued at sea are illegal immigrants, not refugees, and has threatened to have them taken to Libya unless other EU countries offer to take them in.

READ MORE: 'No one lands in Italy without my permission': Salvini resists calls to let rescued migrants disembark

The arancini demonstration was called to show that some in the local community would like Catania to be an “open port” for these and other migrants, according to organizer Silvio Laviano. He described his message as: “Welcome to Catania! Here, have an arancino.”

Why arancini? The Sicilian speciality represents not only a snack to be eaten while travelling but something to offer hungry visitors, participants said.

“For us in Sicily, food has always been the way you welcome guests,” one woman explained.

While some 30 minors on board the Diciotti were allowed to disembark on Wednesday night, Salvini has so far resisted calls to allow the rest of the group to land.

“I'm not backing down,” he insisted on Thursday, calling on the EU to intervene.

The United Nations refugee agency, as well as aid organizations, have expressed concerns over the migrants' continued detention on the ship, a week since they were rescued at sea near the Italian island of Lampedusa.

Pro-migrant protesters have been arriving at Catania port since the Diciotti docked there late on Monday. On Thursday, one group attempted to reach the coastguard ship in a dinghy, but was intercepted by police.