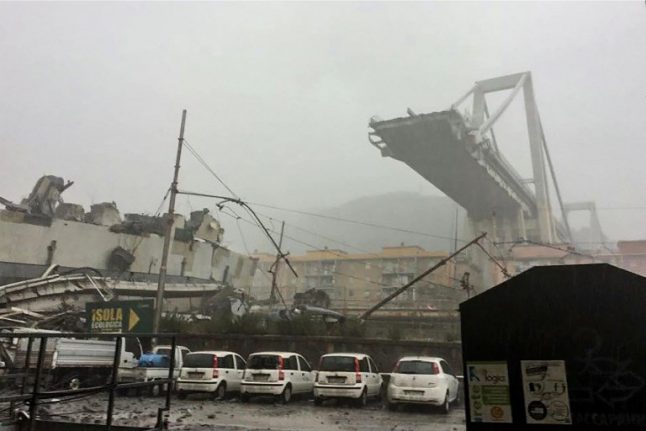 The Morandi Bridge in Genoa, part of which collapsed on August 14th. Photo: Handout/ITALIAN POLICE/AFP.

The collapse of the Morandi Bridge in Genoa raises questions about the prospects of Italy's more than one million bridges built out of concrete.

Italian newspapers have highlighted that 300 major bridges could be at risk of collapse. But an expert who inspects bridges and public infrastructure across the country says those numbers are far too conservative.

“There are approximately more than one million bridges longer than three metres in Italy. If even only one per cent, a conservative estimate, are in bad condition, we can estimate that at least a thousand bridges will be in absolute crisis in the next five to twenty years,” Settimo Martinello, managing director of 4Emme, a Bolzano-based company that inspects bridges across the Italian peninsula, told The Local in a telephone interview.

Martinello says the bridges in real danger are not the marquee projects on highways – there were 1,622 bridges and viaducts longer than 100 metres in 2016, according to Italy's Ministry for Infrastructures and Transport – but more remote crossings and tunnels in some of Italy's poorer and less-developed regions.

The engineer Riccardo Morandi's bridge in Agrigento, now closed, or the Allaro Bridge in Reggio Calabria are often cited as at risk. And they are, but this only obscures the bigger picture of less visible, yet degraded, bridges that are equally at risk in smaller provinces.

“In some cases, a bridge will have been built 30 to 40 years ago and will never have been inspected or undergone any maintenance,” says Martinello. “To maintain them you need technical knowhow.”

“A surgeon doesn't operate without having studied medicine,” Martinello told The Local. Yet “there are no bridges that don't require maintenance,” he adds.

Negligence only intensifies the problem. “If you ignore them, the cost will only rise to repair them,” says the expert.

In the 1950s and 1960s, Italy underwent a construction boom like few other countries in Europe. As the nation's industry grew, so did the country's infrastructure network. Concrete became the elixir of construction companies.