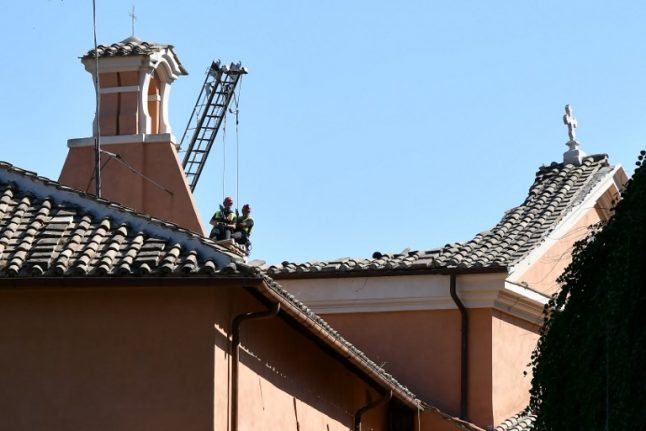 No one is reported to have been inside the church at the time of the collapse mid-afternoon, though firefighters and sniffer dogs were called to comb the wreckage as a precaution.

A priest who was inside an adjoining building is said to be uninjured.

Around three-quarters of the church roof is believed to have fallen in. A crane was used to remove remaining parts that emergency teams judged to be unstable, while the area around the church was cordoned off.

It is not yet clear what caused the collapse, which is reported to have sent up a large cloud of dust visible from some distance.

Images from the scene showed the church open to the elements, beams and rubble covering its floor.

The Chapel of the Crucifix, a 16th-century chapel that lies beneath the main church, is also thought to have suffered damage, though Rome's archaeological authorities said it was minimal.

The Mamertine Prison, reputed to have housed Rome's patron saints Peter and Paul among other famous captives, is not reported damaged in the collapse. The underground dungeon, believed to date back to the 7th century BC, is located underneath both the church and the chapel, which were built above it several centuries later. In the heart of Rome's tourist hub amid the ruins of the Forum, San Giuseppe dei Falegnami (“St Joseph of the Carpenters”) was closed to the public at the time of the collapse. It had undergone restoration work just three years prior.

Its spectacular location, as well its rich Baroque interior, make it a popular choice for weddings; according to La Repubblica, two ceremonies were scheduled to take place there this weekend.