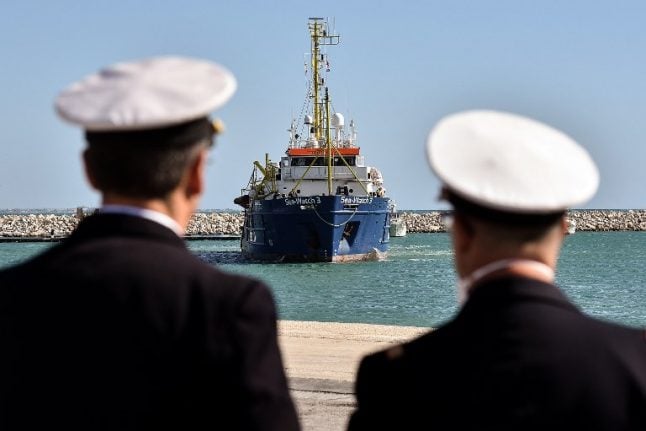 Italy plans to ask the EU to rotate the ports that accept migrants rescued at sea. Photo: Giovanni Isolino/AFP

Trenta will put the plan to her European counterparts during an informal meeting in Vienna.

“I will carry in the name of the Italian government a proposal to modify the rules of the Sophia mission concerning the port of disembarkation,” she wrote on Facebook.

The proposal calls for a revision of the EU's military operation codenamed Sophia — currently commanded by Italy — and under which all migrants rescued disembark at an Italian port.

“We consider this principle unacceptable and want it to be reviewed,” Trenta added. “[On Thursday] the ball will be in the EU camp: by accepting our proposal it will have the opportunity to show it is a real community of values and intentions; by refusing it will deny its own fundamental principles.”

Sophia was launched in June 2015 following a series of deadly shipwrecks involving migrants and has since picked up thousands of migrants floundering in the Mediterranean.

“The proposal aims for a rotation of landing ports … our goal is to ensure that Italy is not the only one taking charge of the problem, but also other member states,” a defence ministry source told AFP.

According to La Stampa newspaper, Italy's idea is to rotate landings between Mediterranean ports, with a particular emphasis on France and Spain, and with Greece and Malta also sharing the load.

Italy has been turning away ships with migrants rescued at sea in a campaign to make EU countries take their share. Last week, it threatened to stop billions of euros of EU funding over the issue, accusing Europe of turning its back as Italy grapples with seemingly endless migrant arrivals.

In the latest incident, nearly 140 migrants who had been stranded on the Diciotti coastguard ship at a port in Sicily were allowed to disembark on Sunday after Ireland and non-EU member Albania agreed to take some of them in.

However, tensions spilled over Wednesday outside a church centre housing some 100 Eritreans from the Diciotti at Rocca di Papa near Rome. Dozens of far right protestors and anti-fascist counter-demonstrators yelled insults and had to be kept apart by riot police.

The migrants were to be moved on to other areas within days.

“They are exhausted but in good health and happy to have arrived,” Caritas charity official Manuela De Marco told AFP.