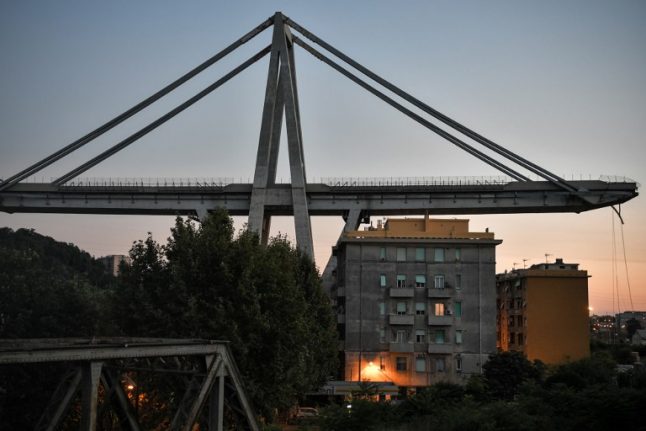 Genoa's Morandi Bridge could be gone by the end of October. Photo: Piero Cruciatti/AFP

Speaking at a press conference on Thursday, Governor of Liguria Giovanni Toti said that the demolition schedule would be “shorter than expected” – around 30 days.

The plan has to be finalized and approved before work begins, but Toti said that could be as soon as the end of September.

Removal will begin with the east pillar, which has been heard creaking since the collapse on August 14th. Experts plan to demolish it rapidly using explosives and machinery, before proceeding to dismantle the west pillar piece by piece.

Last week investigators called for the urgent demolition of the bridge's remains, warning that supports were weakening and at high risk of collapse.

It is not yet clear what will replace the concrete overpass, which was more than 50 years old at the time of its collapse.

Renzo Piano, Italy's most famous living architect and himself from Genoa, has been discussing ideas for a new bridge with the city authorities this week. His proposals include incorporating 43 lamps in memory of the victims.

Other possibilities include replacing the bridge with a tunnel, which could create new space for a park as well as allowing the houses built under the existing structure to be saved.

In the meantime, the company responsible for managing the Morandi Bridge and much of Italy's motorway network, Autostrade per l'Italia, said on Thursday that it would extend the toll-free zone around Genoa established in the wake of the disaster.

The company has come in for criticism over its maintenance of the bridge, especially after reports surfaced this week that executives had written to the previous government in February 2018 to warn of safety concerns.