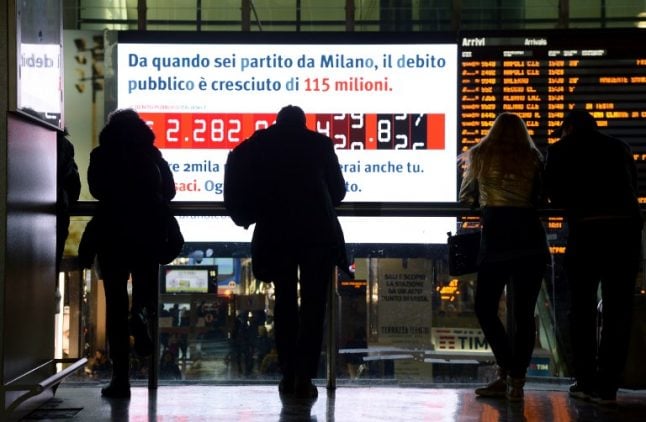 Italy's coalition government, which brings together the League party and the Five Star Movement, is under pressure to respect its anti-austerity electoral pledges.

But debt currently stands at a whopping 132 percent of gross domestic product (GDP), making Italy's the second largest debt ratio in the eurozone after Greece.

“We expect a significant structural effort,” Moscovici said in an interview with Italian business daily Il Sole 24 Ore, adding that it was “in Italy's interest to control its public debt”.

Moscovici also warned Italy against running up a deficit in excess of 3.0 percent of output in its 2019 budget, saying that such an eventuality would spark “difficulties that we don't want to imagine”.

The interview with Moscovici came after Deputy Prime Minister Luigi Di Maio on Tuesday said his government budget deficit may indeed cross the threshold. But Finance Minister Giovanni Tria then sought to assuage investors' fears, saying that Italy was not in fact aiming to exceed that limit.

Moscovici said the European Commission, the EU's executive arm, would launch budget talks with Italy “soon”, but warned that “in light of recent statements”, the discussions would probably “not be easy”.

The ruling coalition in Italy has repeatedly spoken out against the EU's budget constraints.

Separately, Rome has threatened to cut its annual contribution to the EU budget, triggering a warning of sanctions from Brussels and dark threats that it would be breaching the very treaties that underpin the bloc's existence.