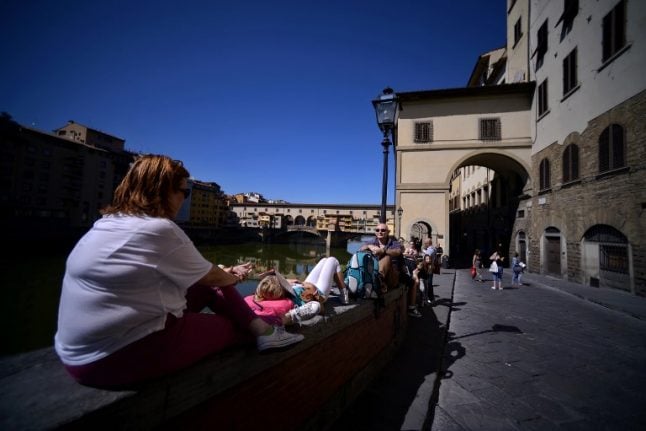 Peckish? Don't even think about pulling out a snack in central Florence. Photo: Filippo Monteforte/AFP

Under a new city ordinance, anyone caught eating on any of four streets that run through Florence's historic centre – Via de' Neri, Piazzale degli Uffizi, Piazza del Grano and Via della Ninna – runs the risk of a fine of up to €500.

“Respect residents, traders and workers of this street,” instructs a new bilingual poster that local businesses have been asked to put on prominent display.

The restrictions apply during peak lunch and dinner times, from 12-3pm and 6-10pm, and will remain in place for at least four months.

They're aimed not only at reducing litter but keeping pavements clear of the crowds that form around eateries, making the narrow streets hard to navigate. Via de' Neri is lined with food shops that include one of Florence's best-known sandwich shops, All'Antico Vinaio, and the popular Gelateria dei Neri, neither of which has space to seat the scores of people who flock there every afternoon for food on the go.


The poster distributed by the City of Florence.

It's not clear whether the city plans to make extra resources available to enforce the rules. Currently volunteers take turns to patrol the centre from Thursday to Sunday around lunchtime on the lookout for bad behaviour, but they have no authority to impose penalties.

Residents' associations had demanded action on “hit and run” visitors who clog thoroughfares and leave their mess behind, according to the president of the Via de' Neri committee, Roberta Pieraccioni, who told La Nazione that they hoped the new measures would “restore a bit of decorum to our street”.

“It's not a punitive measure but a concrete deterrent,” said Mayor Dario Nardella in a Facebook post announcing the ordinance. “If tourists behave themselves as they would at home they'll always be our welcome guests, especially if they want to sample our gastronomic specialities.”

Not everyone agreed with his position, however, with several commenters asking why the city didn't provide more benches, public toilets and litter bins – for tourists and residents alike.

“Punishing without offering an alternative will discredit the city with the visitors who enrich it,” wrote one.

It's not the first time Florence has cracked down on messy eaters. Last year Mayor Nardella instructed city workers to hose down church steps to discourage visitors from sitting on them to snack.

Rome has also experimented with banning picnics around fountains and other historic monuments during the summer months, when tourist numbers peak.

Many of Italy's tourist hotspots are struggling to reconcile the influx of visitors with the needs of locals. Venice, which has seen the number of residents decline as tourist arrivals boom, has resorted to measures as extreme as installing turnstiles in its historic centre to limit crowds, while tourists regularly complain of being aggressively overcharged in shops and restaurants.

In Florence tourism has hit the housing market particularly hard, with an estimated one in five of all properties in the city's historic centre now rented out exclusively to tourists on Airbnb.