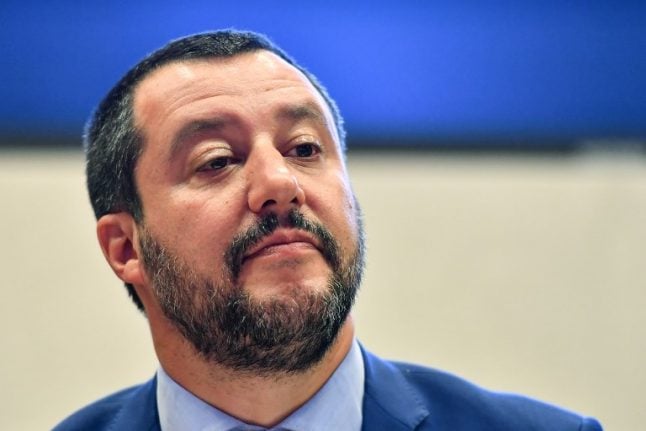 The League's Matteo Salvini has come out on top from the coalition government's first 100 days in power. Photo: Alberto Pizzoli/AFP

When Salvini's League formed a government with the anti-establishment Five Star Movement (M5S) on June 1st, it was the first time a purely populist administration held power in a founding member of the European Union.

After March elections, Salvini's party seemed destined to play second fiddle in the coalition, with just 17 percent of votes compared with M5S's 32 percent.

Instead, Salvini managed to be treated as an equal in deciding on the government's programme and make-up, and since then has endlessly repeated his anti-immigrant mantra in the press and, especially, on social media.

“These first 100 days appear to mark more the end of the election campaign than the beginning of a new government,” Sergio Fabbrini, political science lecturer at Rome's Luiss University, told AFP.

READ ALSO: Who's who in Italy's cabinet Within days of becoming interior minister, Salvini implemented his campaign promise to close Italian ports to immigrants and asylum seekers, starting with 600 plucked from the Mediterranean by NGO boat Aquarius, which was instead forced to take them to Valencia in Spain.

The crisis was only resolved after a meeting between Conte and his “friend” French President Emmanuel Macron, one of the few times that Conte asserted his independence from Salvini.

Conte, a politically unknown law professor, was chosen for the job by Salvini and fellow Deputy Prime Minister and M5S leader Luigi di Maio. Conte was deemed a neutral outsider, albeit ideologically closer to M5S.

With some now seeing Salvini as a future premier, Conte is keeping his options open, and might yet return to a prestigious university role. Meanwhile, Salvini is gobbling up airtime, column inches and social media clicks with his anti-immigrant diatribes,  stirring up Italians' feelings of insecurity and growing euroscepticism.

He has held more than 60 rallies around the country since June, tweeted a barrage of anti-immigrant messages and posted a flurry of Facebook selfie videos “in the name of Italians”, and his policy is bearing fruit.

More than 60 percent of Italians approve of the new government's hardline anti-immigration policy and opinion polls now predict 30 percent of votes for the League, overtaking even M5S.

Salvini, 45, has dictated the government agenda, to the detriment of Di Maio, 31.

Di Maio tried to regain the upper hand over the summer, also lashing out at the European Union over another boatload of migrants, aboard the Diciotti. “The European Union has decided to turn its back on Italy once again,” Di Maio complained at the end of August, threatening to cut Rome's funding for the bloc. In the run-up to the 2019 budget, the two men elected on anti-austerity platforms have toned down their attacks and promised to respect the eurozone stability pact by keeping Italy's public deficit at less than 3 percent of GDP. The precise target for next year's deficit is not yet known, although Salvini and Di Maio have previously said they could break the rules to fulfil campaign promises.

Meanwhile, there has also been some governmental flip-flopping, such as suspending obligatory child vaccinations at the start of August before reversing course just before classes resumed.

Nor have any of their main campaign promises made it into law, including a low-rate “flat tax” of 15-20 percent promised by the League and the “citizen's income” of €780 a month promised by M5S.