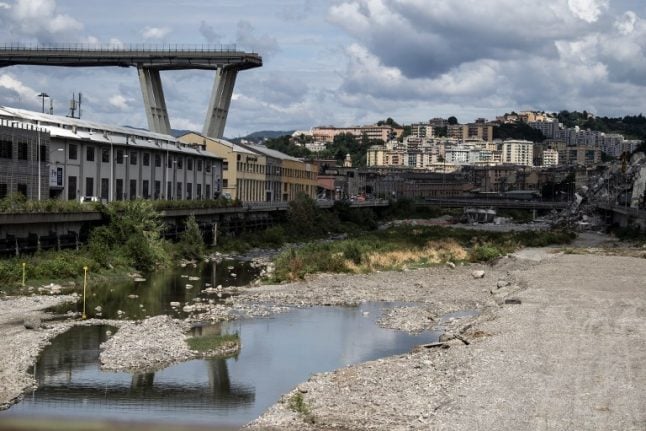 The remains of the Morandi Bridge are to be torn down. Photo: Marco Bertorello/AFP

“This bridge should last 1,000 years and should be made from steel,” Piano told journalists in the north-western port city where he was born 80 years ago.

His project would look a bit like a boat, be more subtle and be white “with its own brightness,” said Piano.

Although the architect said it was important not to rush the new bridge, regional leader Giovanni Toti insisted it would be ready by autumn 2019, “November at the latest”.

Demolition work on the still-standing sections of the bridge will begin this month, and the work will also require demolishing some residential buildings below.

Genoa Mayor Marco Bucci said there would be an international competition to decide on “the very beautiful neighbourhood” that will be built under the new bridge.

“We want to turn this tragedy into an opportunity for Genoa, in the end we will have a more beautiful city than before,” said Bucci. “Genoa has for years done big things, I don't see why we can't continue to do so.”

Details of the final bridge plan, including its exact design and who will build it have yet to be decided.

Representatives of Autostrade per l'Italia (Aspi) and ship-builder Fincantieri were at the press conference and said they could form a consortium for the new bridge.

Italian media reported that after the press conference, that Aspi boss Giovanni Castellucci dropped and broke a piece of the model of the new bridge, at which Piano shrugged and smiled.