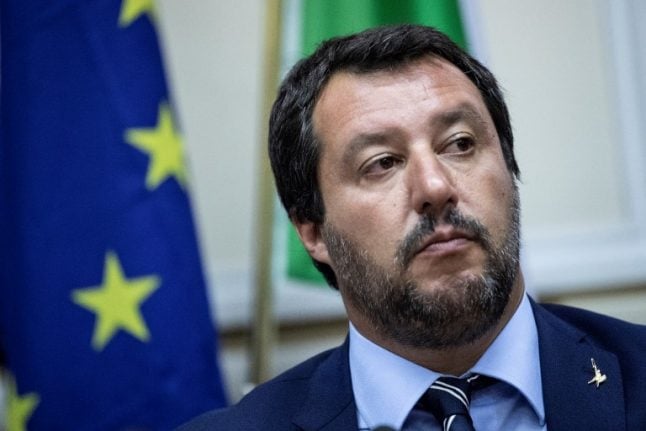 Italy's Interior Minister Matteo Salvini looks on as he addresses a press conference alongside Hungary's Prime Minister Viktor Orban following a meeting in Milan last month. PHOTO: MARCO BERTORELLO /
Prosecutors in Palermo on Friday informed Salvini of the inquiry into his 10-day alleged “illegal confinement” of the migrants in a letter that he opened and read in a video broadcast live on his Facebook page.
“An organ of the state is probing another organ of the state. With the small difference that you (the voters) elected this organ of the state,” Salvini said in the video. “The others have not been elected by anyone and are not answerable (for their actions) to anyone. It is you who asked this minister to control the borders, to control the
ports, to limit arrivals, to limit the departure of illegal migrants.”
The migrants on the Diciotti coastguard ship had been stranded at a port in Sicily before Salvini finally allowed them to disembark on August 26 after Ireland, Albania and the Italian Catholic church agreed to take most of them in.
The 10-day blocking of the Diciotti migrants followed a number of similar standoffs in which Italy turned away ships with migrants rescued at sea in a campaign to make EU countries take their share.
The government threatened to stop billions of euros of EU funding over the issue, accusing Europe of turning its back as Italy grapples with seemingly endless migrant arrivals.
'You only give me more power'
Salvini, who is also deputy prime minister and the leader of the far-right League party, said in Friday's video that he regarded the prosecutor's letter as a “medal”.
“Thank you prosecutors…. I respect your work. Do it well, do it quickly, but you only give me more power,” he said.
Earlier this week, he said 50 of the 144 Diciotti migrants had since disappeared without trace from reception centres. These migrants “were so in need of protection, a roof and a blanket that they decided to leave and disappear,” he said on Facebook.
“This is the umpteenth confirmation that those who arrive in Italy are not skeletons fleeing war and famine,” he added.
Since Salvini's League formed a government with the anti-establishment Five Star Movement (M5S) on June 1, the minister has implemented his party's hard line on migrants. Within days of becoming interior minister, he delivered on a campaign promise to close Italian ports to immigrants and asylum-seekers, starting with 600 plucked from the Mediterranean by NGO boat Aquarius, which was instead forced to take them to Valencia in Spain.
That crisis was only resolved after a meeting between Conte and French President Emmanuel Macron.
Migrant issue divides Europe
Italy's crackdown on migrants comes as leaders across Europe are increasingly struggling to deal with the issue.
In Germany — where Chancellor Angela Merkel has faced anger at her decision in 2015 not to close Germany's borders resulting in the arrival of more than one million people — the country has seen a flare-up of xenophobic
rage in protests in the eastern city of Chemnitz.
In traditionally tolerant Sweden, meanwhile, the far-right is tipped for strong gains in elections this weekend.
And Hungarian Prime Minister Viktor Orban has described Europe as divided into “two camps”  — one that wants to end illegal immigration and another that is pro-migration.
Most of those aboard the Diciotti were Eritreans, along with a small number of Somalians, Syrians, Sudanese and Comorans. Since the start of the year, 3,000 migrants from the former Italian colony of Eritrea have arrived in Italy but less than a thousand have applied for asylum, according to interior ministry figures.
Many Eritreans prefer to continue by land to Germany, Sweden or Britain, despite the heavy controls encountered at the French, Swiss and Austrian borders as well as the EU's Dublin regulation under which a migrant can only
make an asylum claim in the first European country the reach.