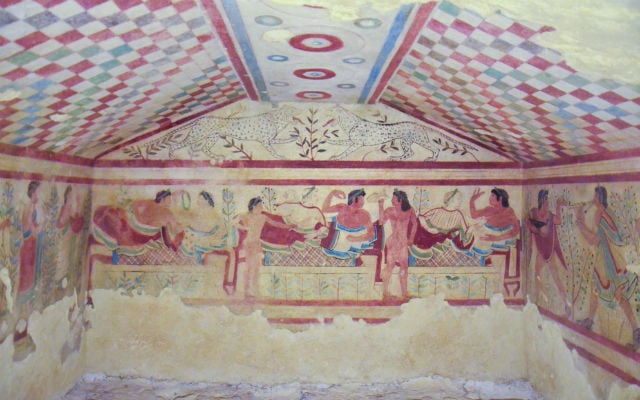 An Etruscan burial site at the Cerveteri Necropolis in Tarquinia, Lazio. Photo: wulwais/Depositphotos

The myth of the abandoned brothers Romulus and Remus, that lies behind the foundation of ancient Rome, is often mistaken as 'year zero' in Italian history.

Perhaps it is the enticing detail of the augury contest the two brothers competed in for who should be the righteous founder of the city, which led to Romulus becoming the ancient empire's first king and Remus' death, that hogs all the attention. Or the mystical detail that the siblings were supposedly rescued from a riverbank and nurtured by a she-wolf.

Most tourists and visitors to Italy flock to Rome to see the remains of the epic civilization that followed the feud between the two brothers, yet often overlook their predecessors.

The advances made by the Rome in engineering, urbanization, law and warfare to some extent justify the centrality of the Romans within Italian history. A more careful analysis, however, reveals a plethora of complex civilizations that already inhabited the territory today known as Italy. All contributed to Rome's ascension.

While a trip to Rome is undoubtedly one of the greatest rewards Italy has to offer, a tour of the remains of the Nuragic era in Sardinia, ancient Greek civilization in Sicily or the Etruscan ruins in central Italy will take visitors further back in time than the Roman Empire.

We've selected a shortlist of four ancient Italian civilizations that predate the Romans to give you an overview of off-the-beaten track ancient Italy.

The name 'Tuscany' originates from the ancient Roman appellation for this central Italian empire of city-states. The Etruscans were heavily influenced by the Greeks. Some historians argue they created the first republic in Italy.

Others say the Etruscans founded Rome, turning it from a village into a city state, while bringing their engineering knowledge to construct landmark urban development projects such as the city's first drainage system, aqueducts, city walls and temples.

The earliest Etruscan inscriptions date back to the 8th century BC, although some historians suggest the ancient civilization existed more than 3,000 years ago. The 4th century BC Roman-Etruscan Wars eventually saw the Etruscans' southern rivals gain supremacy and the Etruscan dominion collapsed as its influence diminished.

Today, the best place to see remains of the Etruscan civilization is in the empire's former capital, Tarquinia, in Lazio, or in the Umbrian capital Perugia, another important former Etruscan trading hub.

The necropolis in Tarquinia, an extensive 'city of the dead,' is one of the best-preserved ancient burial sites in southern Europe, replete with ornate artwork which has been described as “the first chapter in the history of great Italian painting.” The Etruscan well in Perugia highlights the extent of this civilization's engineering feats.

A tomb in the the Etruscan Cerveteri Necropolis in Tarquinia. Photo: wulwais/Depositphotos

The Nuragic civilization existed in Sardinia from approximately 1,800 BC in the Bronze Age until the island's collapse to the Roman Empire shortly before the birth of Christ.

While the Nuragic era is also recognized for the advances made in metal works, the civilization's most enduring contributions were made of stone.

The civilization's name derives from its most characteristic monument, the 'nuraghi,' large stone fortresses. The Nuraghe Santu Antine, near Sassari, in the north of Sardinia. File photo: dnaumoid/Depositphotos

The Nuragic era is also famous for its communal burial sites, known as 'Giant Tombs,' for its water temples, its menhirs – huge, upright, standing stones – and dolmens, megalithic tombs.

The Su Nuraxi nuraghe in the south of the island is a World Heritage-listed site, although more than 7,000 other nuraghi are dotted across the island.

The ancient Greeks of course were not native to Italy although their influence bore heavily on Rome. In the 8th century BC, Greeks began settling in the southern regions of Italy in what was known as Magna Graecia (Greater Greece).

These settlers brought with them much of the Hellenic civilization that would come to shape the Roman Empire, from their Gods, to their technology, their architecture and their food.

Remains of this 500-year era can be seen in the temples and necropoles that survived in the regions of Sicily, Campania, Apulia, Basilicata and Calabria.

The Sicilian city of Agrigento's 'Valley of Temples' is one of the most renowned and impressive sites. Seven temples within a few miles of each other, just outside the southern Sicilian city, lay testament to the Greek influence on the Italian island.

The Temple of Concordia in Agrigento, Sicily. File photo: dnaumoid/Depositphotos

Celts tend to be associated with France, Ireland and the UK, although many who fled wars in France ended up in Italy. The Insubres people founded Mediolanum, Milan, in 600 BC. Many more Celtic clans migrated en masse across the Alps in the 4th century BC, eventually becoming assimilated into the Roman Empire some three centuries later.

At first, they settled in Liguria, Veneto and all along the Po river. But the roots of this migration began nearly a millennium earlier with the arrival of the Canegrate culture, which historians date as far back as the 16th century BC.

The Celts brought with them advances in the use of bronze and other metals, as well as the practice of cremation for their dead.

Few remains exist from this era in ancient Italian history, although the Archaeological Civic Museum L. Fantini in Monterenzio, near Bologna, hosts 40 burial sites and hundreds of artifacts.

All of these civilizations were eventually absorbed by the power of the Roman Empire, but each contributed to the Romans' rise. The ruins, burial sites and artifacts that remain are sure to enrich any trip to Central Italy, Sardinia or Sicily.