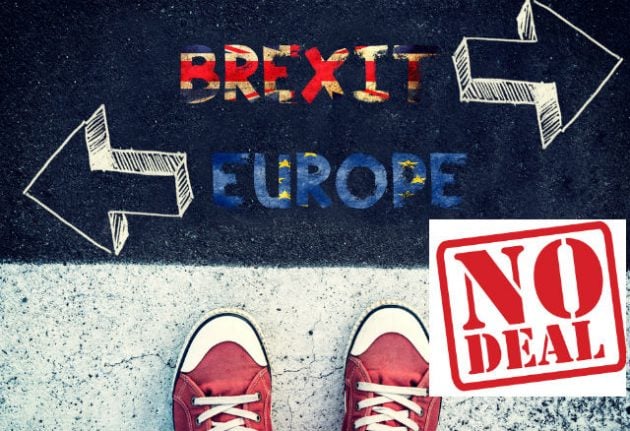 Be prepared: Your driving licence could invalid and your passport out of date. Photo: Deposit photos

The 28 technical notices were published on Thursday afternoon after a long meeting between British Prime Minister Theresa May and her cabinet to discuss Brexit.

The government insists it is still likely to reach a deal with Brussels that will allow for most things – including the rules around driving licences and passports, to continue as they were before.

Nevertheless it feels as though “it has a duty to prepare for all eventualities” including a no-deal Brexit.

Given the increasingly fraught nature of the talks with Brussels and that time is rapidly running out to reach a deal the prospect of the UK crashing out of the EU without an agreement appears more and likely, despite what the government says.

The government has already released technical papers warning Brits in the EU they could lose access to their UK bank accounts and face higher credit card charges.

Here's what the government is warning its citizens when it comes to three key areas: driving licences, passports and mobile phone roaming charges.

And the prospect that driving licences won't be valid, passports could be considered out of date and phone charges could soar have not gone down well in some quarters.

Your driving licence may not be valid, you could be subject to data roaming charges and you may have to pay for a driving permit in every country you visit but at least you'll get a blue passport #NoDealBrexit

A no-deal Brexit will not only kneecap the British economy, disproportionately hurting the poorest. It will also create mountains of new red tape for our passports, driving licences, phone bills and more…

Regular reminder: we do not have to do this.https://t.co/Gbx7EMuLjF

The information below is taken from the so-called “technical notices” released on Thursday.

Risk assessment: Driving in the EU Your driving licence is valid in the EU. As long as you hold a UK licence, you can drive for both work and leisure purposes throughout the EU without other documents.

You do not need to re-sit your driving test.

Your driving licence may no longer be valid by itself when driving in the EU.

If you move to another EU country to live, you may not be able to exchange your licence after the UK has left the EU.

What you would need to do

If there is no deal with the EU, you may need to obtain an International Driving Permit (IDP) to drive in the EU. An IDP is a document which when carried with your driving licence means you would be able to drive outside of the UK including in EU countries. There are different types of IDP. Which one you need depends on which country you are driving in.

You can currently get the 1949 type IDP over the counter at around 90 Post Offices or by mail order from two private companies. This mail order service will cease on January 31st, 2019. After March 2019, if you visit and drive in an EU country, for example on holiday, you would need both:

You would need both types of IDP if you are visiting EU countries covered by different conventions, for example France and Spain.

Moving to or living in the EU

You can avoid this by exchanging your UK driving licence for one from the EU country you move to or live in before March 29th, 2019. UK licence holders who do this, will be able to re-exchange for a UK licence if they return to live in the UK.

We will be seeking to negotiate a comprehensive agreement with the EU to cover the continued recognition and exchange of UK licences after exit.

In the event that we do not achieve a comprehensive agreement, we will also pursue agreements with individual EU countries. In the unlikely event that we leave the EU without a deal, the costs that EU mobile operators would be able to charge UK operators for providing roaming services would no longer be regulated after March 2019. This would mean that surcharge-free roaming when you travel to the EU could no longer be guaranteed.

However, the government would legislate to ensure that the requirements on mobile operators to apply a financial limit on mobile data usage while abroad is retained in UK law.

The limit would be set at £45 per monthly billing period, as at present (currently €50 under EU law). The government would also legislate, subject to parliamentary approval, to ensure the alerts at 80 percent and 100 percent data usage continue.

In the unlikely event that we leave the EU without a deal, our advice to consumers is to:

Risk Assessment: Passport rules for travel to the EU The rules for travel to most countries in Europe will change if the UK leaves the European Union (EU) with no deal.

If there's no deal:

If you plan to travel to the Schengen area after March 29th 2019, to avoid any possibility of your adult British passport not complying with the Schengen Border Code we suggest that you check the issue date and make sure your passport is no older than nine years and six months on the day of travel.

For example, if you're planning to travel to the Schengen area on March 30th, 2019, your passport should have an issue date on or after October 1st, 2009.

If your passport does not meet these criteria, you may be denied entry to any of the Schengen area countries, and you should renew your passport before you travel.

You should have six months left on your passport from your date of arrival. This applies to adult and child passports.

If you renewed a 10 year adult passport before it expired, extra months may have been added to your passport's expiry date. These extra months will not count.

The new rules will apply to passports issued by the UK, Gibraltar, Guernsey, the Isle of Man and Jersey.

Check a passport for travel to Europe

Before booking travel, check your adult and child passports meet the new rules.