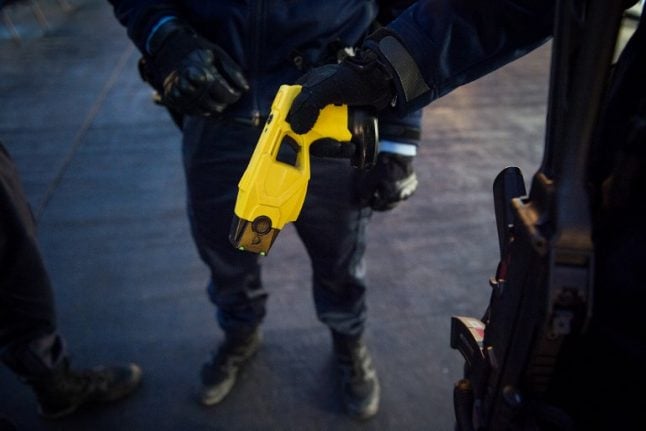 Police in Florence were the first to fire a Taser on a member of the public. File photo: Guillaume Souvant/AFP

The first “real-life” use was in Florence on Tuesday night, when officers fired a Taser to subdue a young man behaving aggressively in the city centre.

The man, described by the media as a 24-year-old from Turkey without fixed abode, was completely naked and punched two other homeless people before resisting carabinieri as they attempted to restrain him.

An officer fired two Taser shots at him, each of which gives a shock of several thousand volts for up to five seconds at a time.

The man was taken to hospital and transferred to a psychiatric ward, from which he had been discharged just a week before.

As well as in Florence, police in Milan, Turin, Genoa, Bologna, Padua, Reggio Emilia, Naples, Caserta, Catania, Brindisi and Palermo have been trying out the stun guns since September 6th in the first trial of its kind in Italy.

Until this week officers were not reported to have fired their new weapons, though in at least three cases they said they had removed them from their holsters as a warning.

The Taser trial will last three months, after which authorities will decide whether to abandon it or expand it to other cities.

The use of the controversial weapons by officers was approved in July by Interior Minister Matteo Salvini, who called them “a non-lethal weapon of dissuasion”.

While they may benefit police, critics argue that they are unsafe and have in some cases caused injury and even death. The United Nations Committee Against Torture has declared them a potentially deadly form of torture.

READ ALSO:  What you need to know about gun laws and ownership in Italy