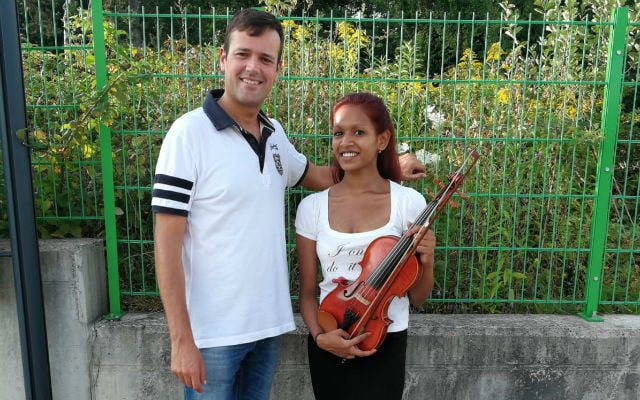 What was once a lush green park and natural reserve on the outskirts of Monza, just north of Milan, has become a pusher's paradise.

The Groane park stretches into the provinces of Monza-Brianza and Varese and cuts across 20 councils. One in particular, Ceriano Laghetto, is facing a drugs epidemic disproportionate to its size.

Councillors say that hundreds of customers travel by train from across Lombardy to this small town of 6,500 people to purchase illegal drugs such as cocaine and heroin on a daily basis.

The problem began when the Ceriano Laghetto-Groane train station was reopened, after 50 years of being closed, in 2012.

“For six years we have been penalized by the station's opening. The line has been taken hostage by drug addicts from across the region,” Dante Cattaneo, Ceriano Laghetto's mayor, told The Local.

More than 30 drug-dealing locations exist – according to Cattaneo – in the vast 3,800-hectare Groane park, Lombardy's second largest, although only the Ceriano Laghetto-Groane train station leads to the heart of the dense woods where dozens of dealers have made their 'supermarket' in recent years.

“The train station is in the heart of the woods and the dealers are only a few metres away from the platforms,” adds Cattaneo.

His council has no formal figures on the number of drug users that commute through the station to get their fix, although he claims that hundreds of people intent on buying drugs arrive each day.

“A train arrives in each direction every half an hour and about ten people will get off each train who have arrived solely to buy drugs,” Cattaneo told The Local.

The dealers have become so self-confident that a sign at the station once advertised that the Groane park is open 24 hours for drug transactions, reports local daily Monza Today. The mayor says he has called for a permanent garrison to be stationed in the park for years, although previous governments have simply ignored his requests for help. “I have much more confidence that the current government will do something,” added Cattaneo, a member of the governing League party.

As Cattaneo awaits an answer to his request for army support, he has confronted the issue head on with the limited resources available to him. In May this year, Ceriano Laghetto held council meetings in the station's car park. Last August, the mayor went even further by temporarily moving his office into the Groane park.

Each month, the council and a team of volunteers “occupy” the woods in the park to clean up syringes and other drug refuse – and to remind dealers that they do not have carte blanche to operate.

But the problem persists. The Groane park stretches to nearly 4,000 hectares and is home to hundreds of pathways hidden in the dense woods.

“The dealers have become much more mobile in recent years, which has made it hard to track them,” Cattaneo told The Local.

It is not only the drug dealing that is the problem. Users inject in the park, turning an area used by local residents, and children, into a drug wasteland.

Faced with a crime ring that generates between €5 million and €6 million in drugs revenues per year, according to L'Espresso, the local council has unveiled a new weapon to combat the bane: a petite 19-year-old viola player, Asha Fusi.

“Bringing culture to the Groane park is one of the means of countering the phenomenon of dealing that has been here for years,” Asha Fusi, a councillor responsible for culture in Ceriano Laghetto, told The Local.

Late last month, Fusi became part of a new plan to tackle the drug problem. Armed with nothing but a viola and Italian composer Benedetto Marcello's Concerto in G, the teenage musician began playing classical music right in the middle of the park where drug users come to buy from dealers.

The sound of live music temporarily deterred the dealers and scared away their clients. “As soon as I started playing they left, as if frightened by the presence of people who are not their clients,” Fusi told The Local.

READ ALSO: 'It's incredible to lead an orchestra in Italy, the place where music was born'

The Italian music student believes that if classical notes can have such an impact, then an army intervention could certainly do more.

“Intervening with music makes me understand how even the little things can help. Each of us should fight to reclaim the woods,” says Fusi.

“People should be able to go out for a walk, take a train or simply be able to return to live quietly, without the terror of stepping on syringes or worse.”

Similar cultural interventions to confront social ills have been tested around the world. A father in Paris used classical music to scare away dealers from below his window, as The Local France reported.

Businesses in Seattle have blurred country, classical and opera music to deter crime near their offices. The former mayor of the Colombian capital Bogota sent mimes out to control traffic.

In Ceriano Laghetto, customers looking to buy drugs continue to flood into the small town via the train station and more than music will be needed if the park is to be cleaned up.

But the council isn't giving up.

“I am convinced that combating the culture of drugs – and therefore that of death – with art and in particular with music is a very strong 'weapon'. Of course, it is not enough, but it is already an important message from a symbolic point of view,” Fusi told The Local.