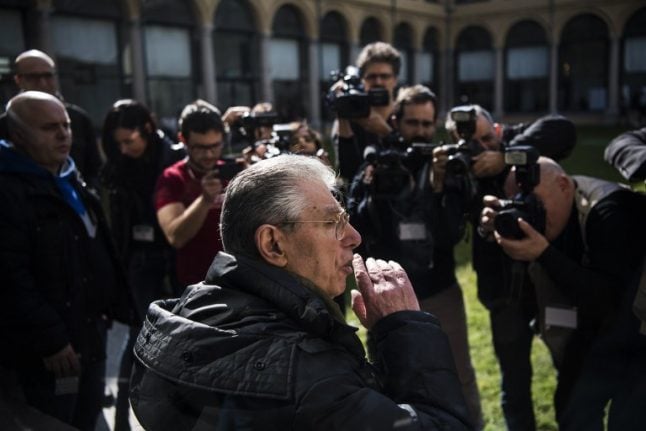 Umberto Bossi, the League's former founder, who has been convicted of fraud. Photo: Marco Bertorello/AFP

The party of Deputy Prime Minister and Interior Minister Matteo Salvini was found to have fraudulently claimed €49 million in electoral expenses in 2008-2010. It was led at the time by Umberto Bossi and its treasurer was Francesco Belsito.

Prosecutor Francesco Pinto told the AGI news agency the League said it was “ready to hand over to the prosecutors €100,000 every two months, that is €600,000 a year”.

At that rate the state would recover the money owed it a little before the end of this century.

The daily Repubblica suggested the mooted figures could be a minimum, however, and could rise depending on the state of the party's finances. Italian authorities authorised a freeze of League funds in early September after Bossi and Belsito were convicted of fraud. They have both appealed, and magistrates have only managed to recover €3 million so far.

News of the deal reached on Tuesday drew acerbic comments from opposition parties.

“The thieving League has decided to return the money on comfortable terms. Paying it back will take about as long as it does to expel illegal immigrants – 80 years,” tweeted Elena Boschi of the centre-left Democratic Party.

Salvini, who took over the party in late 2013 after a raft of scandals and turned it around, insists he never saw the €49 million.