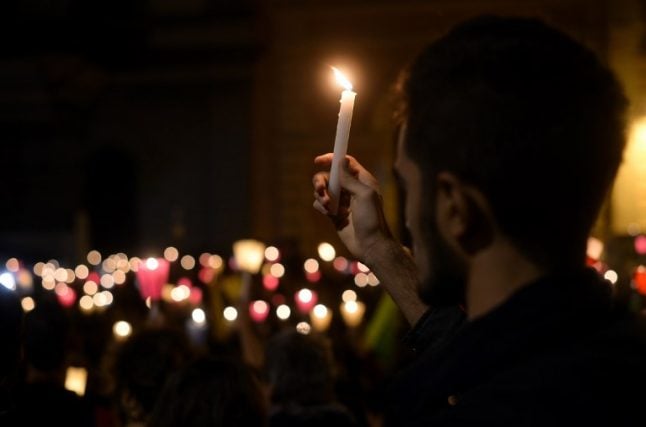 At a 2014 demonstration after police officers were cleared of the death of Stefano Cucchi in custody. Photo: Filippo Monteforte/AFP

In city piazzas and lecture theatres around the country, community groups and student organisations are showing pirated versions of the Netflix film Sulla mia pelle, or “On My Skin”.

The film tells the tragic story of Stefano Cucchi, 31, who was arrested in Rome in October 2009 in possession of 20 grammes of hashish and two grammes of cocaine.

Director Alessio Cremonini's film has bounced from the red carpet of the Venice Film Festival, where it premiered last month, into the collective conscience of Italian youths living under a populist, right-wing government. Some of the 2,000 people who attended a screening at Rome's prestigious La Sapienza university on Friday were reduced to tears.

“What happened to Stefano Cucchi could have happened to any one of us,” said Teo, a 27-year-old cameraman.

Student Luca Matteuzzi said the film was “both hard and beautiful. Violent without showing any blood.

“It doesn't show the police as animals but it points the finger at a timorous bureaucracy that is incapable of facing its responsibilities.”

In the film Cucchi, who suffered from epilepsy, spends a week going through the system, at police stations and then Rome's central Regina Coeli prison.

Despite being covered in bruises and barely able to walk, a judge remands him into custody and he eventually ends up in the prison infirmary, where he dies a week after being arrested.

The already slight Cucchi weighed just 37 kilos when he died, and his family took shocking photos of his emaciated and battered body in the morgue.

His sister Ilaria has fought for justice for years, trying to establish who was responsible for her brother's death nearly a decade ago.

However, despite years of legal battles no one has yet been successfully prosecuted. Five police officers are currently on trial over the affair, three of them charged with manslaughter.

“It's moving to see how things are being organized spontaneously to see my brother's story,” Ilaria Cucchi told AFP.

“He wasn't anybody, and now they'll know him in Spain, in France, around the world,” said Cucchi, who after the premiere dedicated the film to Interior Minister Matteo Salvini.

“This film should make everyone reflect, especially [Salvini]. Stefano represents a human being whose rights were denied and violated,” said Ilaria, who accused the police of torturing her brother. Ilaria and Stefano Cucchi before his death in police custody. Photo: Ilaria Cucchi/Facebook

Listings of upcoming public screenings can be found easily online.

“This is how we can make people aware of the abuse of power by those in uniform and, more generally, on conditions in Italian prisons,” screening organizer Giovanni told Italian daily La Repubblica.

The film came out in Italian cinemas on September 12th and Andrea Occhipinti of distributor Lucky Red has slammed the “piracy” going on around the country.

The film's star, Alessandro Borghi, who lost 18 kilos to play the role of Cucchi, said: “What's happening goes beyond cinema. We are all fighting for the same cause, it's a communion of ideas.”