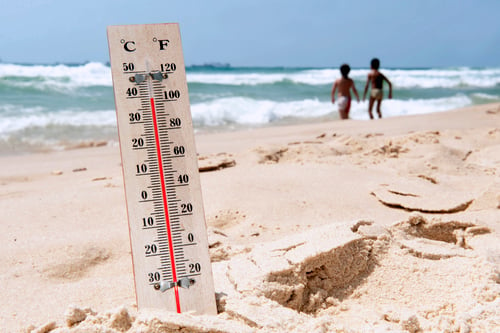 Those frustrated with the torrid heat that has marked the Italian summer so far will be able to breathe a sigh of relief come Sunday, when temperatures will drop sharply, according to ilMeteo.

But not before this weekend sees some of the hottest weather this month, with mercury levels rising to 30°C throughout much of the peninsula.

Temperatures in the North are expected to exceed seasonal averages by as much as 6°C, according to 3Bmeteo.

The Northeast region of Emilia-Romagna is forecast to reach highs of 30°C Saturday, with Central Italy between Tuscany and Le Marche experiencing peaks of 29-30°C and the Southern regions of Apulia and Basilicata seeing temperatures of 28-30°C.

The heat will be brought in by an African anticyclone which is set to displace the mini-cyclone in the Tyrrhenian Sea that has been causing bad weather in Central Italy and Sardinia.

We're closely monitoring an ongoing cyclogenesis (formation of Medicane still possible within the next 36 hours) in the Tyrrhenian sea. Textbook structure of deep convection can be seen both on radar and satellite animation. Animatino by Youmeteohttps://t.co/wJ9BVchj0I pic.twitter.com/oI4UufUeAO

However, starting Sunday cold Bora winds blowing in from the Balkans will sweep across Northeastern Italy and move South across the peninsula, causing a drop of 5-10 °C in temperature and triggering thunderstorms and hailstorms.

By Tuesday the entire country will be experiencing cool autumnal weather that is likely to fall below seasonal averages, according to meteorologists.