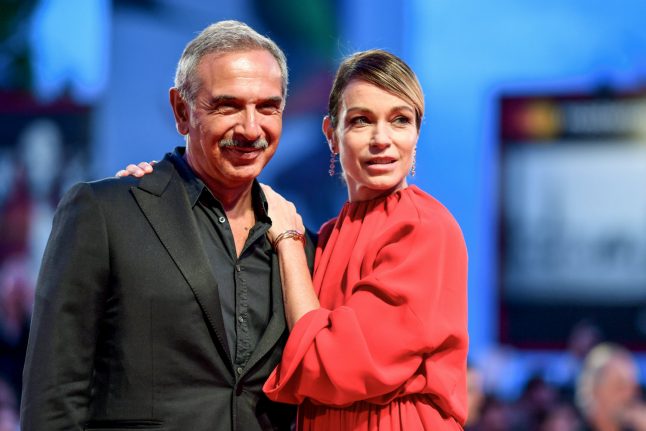 Head of the Italian chamber of fashion commerce Carlo Capasa with his wife, actress Stefania Rocca, at the Venice Film Festival. Photo: AFP

“The problem of irregular employment exists in the world and luxury businesses are the most active in the fight against the phenomenon,” said Carlo Capasa, head of the Italian chamber of fashion commerce.

“Taking a few units that go underneath the radar seems a little pretentious,” he told AFP at Milan Fashion Week after the NYT front-page investigation headlined “Inside Italy's Shadow Economy”.

The article says “thousands of low-paid home workers create luxury garments without contracts or insurance” and quotes one unnamed woman who is paid around one euro an hour to sew at home.

Two other unnamed workers are quoted, one of whom only talks about conditions 10 years ago and the other who does not say how much she is paid.

The Italian fashion chamber of commerce put out a statement late Friday in response to the article, saying that the only information about the scale of the problem in the article quoted Tania Toffanin, author of the 2016 book “Fabbriche Invisibili” (Invisible Factories).

She “estimated that there are 2,000 to 4,000 irregular home workers in apparel production” in Italy, the NYT wrote.

“In the context of an big industry which employs 620,000 people in 67,000 companies, it is clear that irregular workers represent an anomaly,” the chamber said.

Capasa said that the aim was to have zero irregular workers in the industry.

“It will take time but we are doing it.”

Roberto Manzoni, head of the Italian fashion federation Fismo, meanwhile blamed low wages on the constant drive for consumers to be able to buy more for less.

“It's the tyranny of consumers' choice that pushes businesses in the sector to find the least expensive solutions to remain competitive, notably with Asia which manufactures at a low cost,” he told AFP.