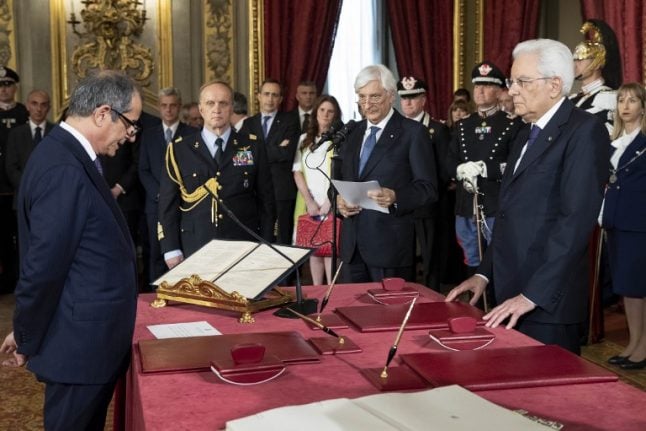 All eyes will be on Western Europe's first anti-establishment leadership to see whether it will defy Brussels — potentially sparking panic on the financial markets — or toe the line.

The coalition, expected to present a revised budget for 2018 and its plans for 2019, has been struggling to find a way to both uphold its electoral promises and reassure investors worried about the health of the eurozone's third largest economy.

It all revolves around one key figure: the ratio of public deficit to gross domestic product (GDP). A parliamentary source close to the government on Tuesday said it was likely to come in at somewhere between 1.8 percent and 1.9 percent of GDP in 2019, compared to the 0.8 percent forecast by the previous centre-left government.

Italy's public debt currently stands at 132 percent of GDP, the biggest in the eurozone after Greece.

Intense negotiations have been under way between the coalition parties — the anti-establishment Five Star Movement (M5S) and hard-right League — and Economy Minister Giovanni Tria, an independent who is believed to have set an upper limit of 1.6 percent.

The cabinet will meet at 6 pm on Thursday, suggesting the talks will go on into the night.

He initially insisted it could do no harm to go over the 3.0 percent threshold set by Brussels. On Monday, Di Maio said if Paris could play fast and loose, so could Rome: he pointed to France's public sector deficit, expected to rise to 2.8 percent of GDP next year. Was Italy not “a sovereign country just like France”, he asked.

By Wednesday the head of the populists said his movement would not vote for the budget if it was not “courageous” enough. A “serious minister” would find a way to produce the funds, he said in a swipe at Tria.

An audio message in which the prime minister's chief spokesman threatened to “eliminate a tide” of treasury officials unless they find the money for projects, including a basic income grant promised in March elections, had already caused a political storm. The message leaked to the media promised a “mega-vendetta” if the cash was not forthcoming for the series of costly pledges made in the joint government programme.

Hours after Di Maio threatened not to back the budget, Tria said that the basic minimum income would indeed be provided for. The Five Star's key promise is a basic income of €780 for the unemployed and those living on low wages, but the price tag — €10 billion at its most modest estimate — would weigh heavily on the public purse.

The League also wants to introduce a “flat tax” of 15 to 20 percent for companies and individuals, which is estimated would reduce tax revenues by €80 billion per year.

Such big spending may unnerve investors and drive up the spread between the German and Italian bond yields, which rose above 300 points in May amid concerns over a eurosceptic government taking power. The greater the spread, the more expensive it becomes for the state to borrow money, reducing its financial margins for manoeuvre.

The situation is made more complicated by a lacklustre growth forecast: just 1.0 percent in 2019 according to the Bank of Italy and the International Monetary Fund (IMF), and 1.1 percent according to the European Commission.

As trading got under way on the Italian Borsa, nervous investors pulled the benchmark FTSE MIB down 1.4 percent in early action.