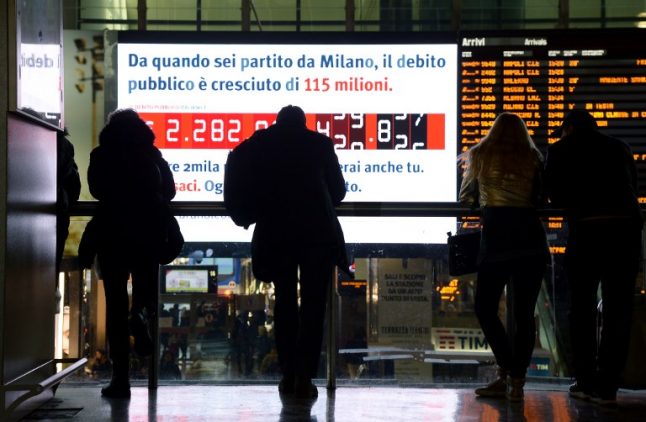 The government in Rome quickly said it was not seeking a showdown with the EU even as it agreed on a deficit vastly exceeding the one foreseen by the previous, centre-left government.

In itself, the budget plan, which includes a deficit target 2.4 percent of gross domestic product (GDP) for the next three years, is not in breach of the EU deficit ceiling of 3.0 percent.

But, crucially, it will inflate the country's already mammoth debt burden, currently at 131 percent of GDP and the biggest in the eurozone bar Greece, and way above the 60 percent EU ceiling.

The Milan stock exchange fell Friday in response to the belt-loosening Friday, posting a loss of 3.7 percent at the close, after jittery investors dumped shares — with banking stocks hit the worst.

EU too absorbed to play hardball?

The yield on Italian government bonds shot up above the symbolic 3.0 percent threshold and the euro also came under pressure.

“It is a budget which appears to be beyond the limits of our shared rules,” said Pierre Moscovici, who runs the European Commission's economic and finance portfolio.

“If you allow public debt to increase you create a situation that becomes unstable as soon as the economic context worsens,” he added.

Italy does indeed face a lacklustre growth forecast: just 1.0 percent in 2019 according to the Bank of Italy and the International Monetary Fund (IMF), and 1.1 percent according to the European Commission.

Rutte, who is known for a lack of patience for lax fiscal policies, told reporters it was now “up to the European Commission to say something about this”. But Angela Gallo, a finance lecturer at the Cass Business School in London, said the EU may be too absorbed with Britain's looming exit from the bloc to play hardball with Rome.

“Brexit remains the main source of macro risk for the EU,” she told AFP.

“Can the EU afford a crisis with Italy amidst the Brexit negotiations?”

“The dialogue begins now with the EU and with major private investors, and we are not seeking a conflict,” he told journalists.

'The debt will go down'

“We want to pay back the debt and I can assure you the debt will go down,” Di Maio said, adding that he expected the economy to grow as government spending rises.

Analysts cast doubt on Di Maio's claim, however, with consultants at Bologna-based Prometeia saying that “bringing the deficit up to 2.4 percent of GDP over the next three years may well have zero impact on growth”.

Despite the warnings, Di Maio and Matteo Salvini — also deputy prime minister — celebrated the agreement, which they secured against the resistance of the country's more cautious finance minister, Giovanni Tria.

Experts say that by keeping the deficit below the EU's threshold, Italy may have eschewed triggering an all-out eurozone crisis — for now.

But Capital Economics analysts predicted the budget deficit “will actually be even wider than the government expects.”

Di Maio had previously threatened to vote against the budget unless funds were found for projects promised in March elections, including the movement's flagship pledge for a basic monthly income of 780 euros for the unemployed and those on low wages.

There were 10 billion euros ($11.5 billion) earmarked for the income pledge in the budget, which “for the first time in the history of this country will eradicate poverty”, he said.

Salvini said the budget would lower taxes by 15 percent for over one million Italian workers and free up around 400,000 jobs for the young by enabling people to retire earlier.