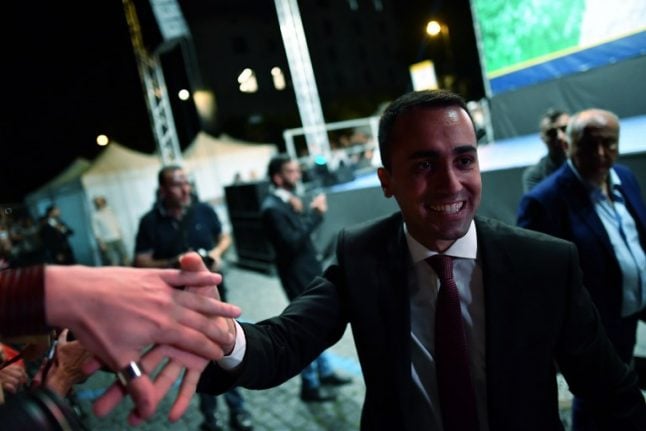 Italy's Deputy Prime Minister Luigi Di Maio, who is celebrating after he got his flagship policies into the new budget. Photo: Alberto Pizzoli/AFP

“We're satisfied, this is the budget of change,” joint deputy prime ministers Matteo Salvini and Luigi Di Miao said in a statement after securing a last-minute victory over the country's more cautious finance minister.

The deficit is set at 2.4 percent for 2019, 2020 and 2021. The figure, vastly higher than the 0.8 percent forecast by the previous, centre-left government, will inflate the country's already mammoth debt burden — currently 131 percent of GDP, the biggest in the eurozone after Greece.

There were cheers from flag-waving members of the anti-establishment Five Star Movement outside the prime minister's offices in Rome as their leader Di Maio left the cabinet meeting, shouting: “We did it!”

The decision follows weeks of suspense over whether Western Europe's first anti-establishment leadership would defy Brussels with its first budget to uphold its costly electoral promises.

Finance Minister Giovanni Tria, an independent, had attempted to set an upper limit of 1.6 percent but was forced to back down. His capitulation came just hours after rumours he would be forced to resign if he refused to play ball.

The 2.4 percent figure “suggests that Mr Tria is not the moderating force that some had assumed, and will raise question marks over his future,” said Jack Allen, Senior European Economist at Capital Economics.

“Even if he stays on as finance minister, his credibility has taken a knock and his presence in the cabinet will be of less comfort to investors in the coming weeks and months,” he said.

He had previously threatened to vote against the budget unless funds were found for projects promised in March elections, including the movement's flagship pledge for a basic income of €780 for the unemployed and those on low wages.

There were €10 billion earmarked for the income in the budget, which “for the first time in the history of this country will eradicate poverty”, he said.

Salvini said the budget would lower taxes by 15 percent for over one million Italian workers and free up around 400,000 jobs for the young by enabling people to retire earlier. All would be paid for without imposing a VAT hike on long-suffering Italians, he said.

Di Maio had repeatedly railed against the EU's budgetary restrictions, initially insisting it could do no harm to go over the 3.0-percent threshold set by Brussels.

“We'll explain to the markets that there are so many investments we can do with this 2.4 percent that we'll be able to make the economy grow as we wish,” the populist leader said. Italy's draft budget must be submitted to the European Commission by October 15th and “a protracted period of negotiation between Italy and the Commission seems likely,” Allen said.

The plans to vastly expand Italy's deficit spending appear to breach EU budget rules, EU Commissioner Pierre Moscovici said on Friday. “It is a budget which appears to be beyond the limits of our shared rules,” said Moscovici, who runs the Commission's economic and finance portfolio, on BFMTV and RMC radio.

The big spending may also unnerve investors and drive up the spread between the German and Italian bond yields, which rose above 300 points in May amid concerns over a eurosceptic government taking power. The higher the yield, the more expensive it is for the state to borrow money, reducing its financial margins for manoeuvre.

The rate of return to investors on ten-year Italian government bonds shot to 3.084 percent from 2.888 percent at the end of trading Thursday on the secondary market, while the spread with benchmark German government bonds widened to 2.6 percentage points.

The situation is made more complicated by a lacklustre growth forecast: just 1.0 percent in 2019 according to the Bank of Italy and the International Monetary Fund (IMF), and 1.1 percent according to the European Commission.