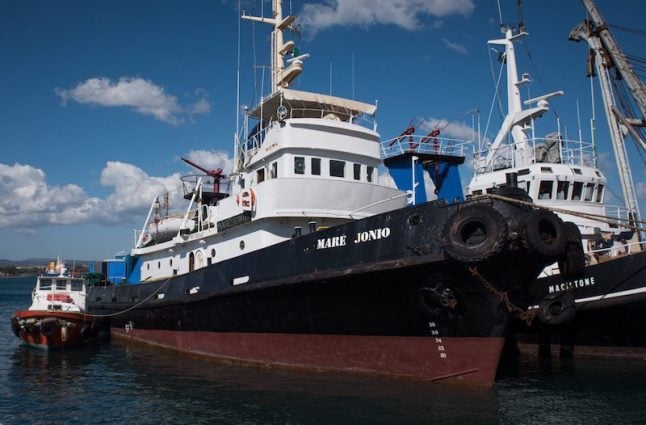 The Mare Jonio, which NGOs say will patrol the waters off Libya. Photo: Sea-Watch

“The #MareJonio is on its way!” Sea-Watch tweeted. “In cooperation with #Mediterranea we are back at sea, to keep a sharp lookout and to challenge the European policy of letting people drown.”

The announcement came on the same day that the Aquarius rescue ship sailed into Marseille harbour and an uncertain fate after Panama pulled its flag, meaning it cannot leave port without a new flag.

The #MareJonio is on its way! In cooperation with #Mediterranea we are back at sea, to keep a sharp lookout and to challenge the European policy of letting people drown. Updates will follow here soon. pic.twitter.com/gHPaOQTbfO

The Mare Jonio is a tug flying the Italian flag that left Augusta in Sicily on Wednesday evening, headed south, maritime tracking websites said. The 37-metre vessel – around half the length of the Aquarius – is not intended to rescue migrants and bring them to a safe port, but to spot and secure migrant-carrying boats that are in distress.

It will also provide a civilian presence in an area where they say the Libyan coastguard and international military vessels are failing to rescue people, despite several shipwrecks in September. Spanish NGO Proactiva Open Arms sent the Astral sailboat to the area on a similar mission a few days ago.

The Astral was off the coast of Lampedusa on Wednesday to commemorate the fifth anniversary of a shipwreck there in which 366 migrants died in 2013. The disaster pushed Italy to launch its Mare Nostrum military operation to rescue migrants making the perilous journey from North Africa to Europe. Since then European Union and NGO boats have joined in, although most of the aid group boats have now stopped work, some because of what they say are trumped-up administrative charges.

The International Organisation for Migration says that around 15,000 migrants have drowned in the central Mediterranean since the Lampedusa disaster. During the same period Italy has received around 600,000 migrants on its coast, while other European nations have closed their borders.

Italy's former centre-left government tried to stem the flow of migrants by working with the Libyan authorities and limiting the NGO effort. Anti-immigrant Deputy Prime Minister Matteo Salvini, who came to power as part of a populist government in June, has since then closed Italian ports to civilian and military boats that have rescued migrants, saying Italy bears an unfair share of the migrant burden.