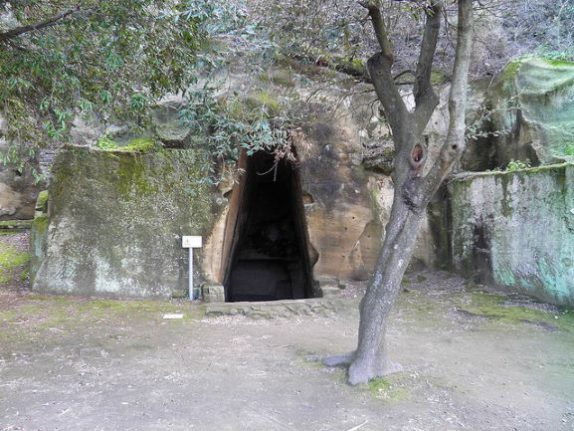 The mouth to the cave of Sibyl in Cumae. Photo: Carole Raddato/Flickr

Paintings found on the walls of the newly-discovered tomb, which dates back to the 2nd century BC, depict a banquet scene, including a naked slave holding a silver jug and goblet.

It was discovered by Priscilla Munzi, a researcher at the Centre Jean Bérard at the École Française de Rome, and Jean-Pierre Brun, a professor at the Collège de France, who have been working on excavations in Cumae since 2001, reports La Stampa.

Cumae, twice the size of the Roman town of Pompeii, is located 12 miles west of Naples and was the oldest Greek mainland colony in the West.

Founded in the 8th century BC by Greeks from Eubea, it was eventually subdued by the Romans in 338 BC and became a wealthy Roman town.

It is famously the home of the Cumaean Sibyl, the best known of the Greek prophetesses, who features in Virgil’s Aeneid and is said to have successfully predicted the founding of Rome.

A cave believed to be her former dwelling can be visited by the public today.

Paolo Giulierini, director of the Archaeological Park of the Phlegraean Fields where the discovery was made, said “The discovery, which will enrich the museum and the park, is a symbol of great scientific and historical progress.”