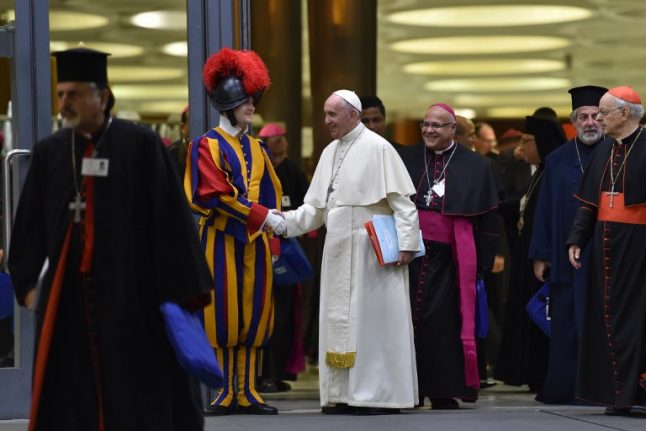 Pope Francis shakes hand with a Swiss Guard as he leaves after addressing the opening of the Synod of Bishops on Wednesday. Photo: ANDREAS SOLARO / AFP
But while the young insist that sex is an unavoidable topic at the month-long meeting of world bishops, the subject has a low profile in the gathering's 70-page working document.
The text notes “the beauty and depth of affective and sex life” that can be “disfigured” by “early sexual activity, multiple sexual partners, digital pornography, exhibiting bodies online and sexual tourism”.
It admits that the Church is no longer the moral compass it once was: “Sociological studies show that many young Catholics do not follow Church teachings on sexual morals,” it says.
But the fact that it mentions, once, the term LGBT (Lesbian, Gay, Bisexual and Transgender) was too much for Archbishop Charles Chaput of Philadelphia, a member of the synod's permanent committee.
“There is no such thing as an 'LGBTQ Catholic' or a 'transgender Catholic' or a 'heterosexual Catholic' — as if our sexual appetites defined who we are,” he told the meeting on Thursday.
The working document, which will be the basis for a final text, notes the existence of LGBT “who wish to benefit from greater closeness and experience greater care by the Church”. But Chaput objected.
“'LGBTQ' and similar language should not be used in church documents, because using it suggests that these are real, autonomous groups, and the church simply doesn't categorize people that way,” he argued.
'Prism of pornography'
Auxiliary Bishop of Lyon Gobillard said he had spent the summer listening to what young people had to say.
“As this synod begins, it is essential to remember how important it is to be able to speak freely about sexuality, for our youths and seminarians to be educated so that they can educate,” he told the meeting of bishops and Pope Francis.
“Too often, young people discover sexuality through the prism of pornography or the embarrassed silence of (previous) generations,” he said in his four-minute address.
He called for a change in mentality that would see sexuality and celibacy discussed in schools and seminaries.
Even Pope Francis has approved of young lovers living together provided it leads to marriage.
“Sexuality is no longer a taboo within the Church but it's still difficult to talk about it in simple terms,” Gobillard told journalists before the synod.
Dealing with the controversial topic is complicated by the presence of bishops from cultures with more or less conservative attitudes to sexuality, including some countries in Africa, Asia and the Middle East.
An international seminar on youth in September 2017 in preparation for the synod invited French sexologist Therese Hargot to speak.
'Disconnected from reality'
“We took part in a series of conferences on young people and political engagement, social engagement, migrants… but not a word on sexuality, friendship, love, not one discussion about love!” she said in a book of conversations with Gobillard.
“Love and whatever you want to do, do it!” she said.
The official response from an unnamed Vatican official during the 2017 seminar was not encouraging, she added.
“We decided not to discuss these subjects because we didn't want them to take over our conversations and heighten simmering tensions between progressives and conservatives,” he told her.
“Moreover, as people of religion, sexuality isn't our topic,” the official added.
“Is the Church really so disconnected from reality?” asked Hargot.
“Church discourse sounds like a litany of prohibitions. And then the over-mediatised acts of some (Church) representatives discredits it in the eyes of the average person,” she said.
There was as much anger as there was disappointment over the string of sex abuse scandals involving priests, she added.
“Either the Church decides to shut up about these things, or it should decide to get educated!” said Hargot.
Gobillard recalled that when he entered the seminary in 1989, his teachers recommended having a cold shower or going jogging to assuage sexual urges.
Things have changed in some countries, like France, he said.
“Today we discuss sexuality in our training of young priests,” he said. But he admitted there was still a lot of work to be done in other countries.