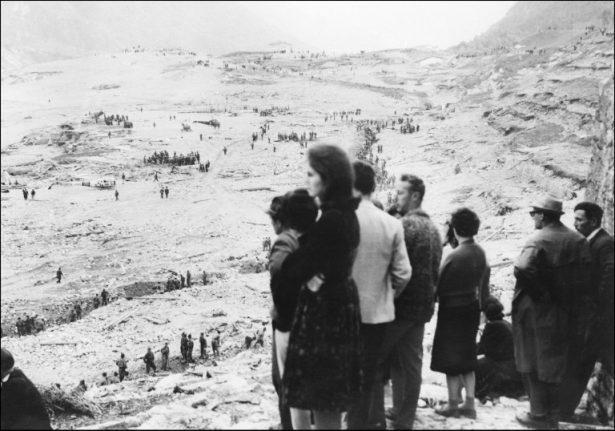 After the flood: people survey the damage to the Piave Valley after the Vajont Dam diaster. Photo: AFP

At 10:39 pm on October 9th, 1963, a massive landslide sent rocks, trees and earth plummeting into a reservoir created by the new Vajont Dam, built high in the mountains 100 kilometres north of Venice.

The impact sent a huge wave of water shooting 250 metres above the dam, before sweeping down the Piave Valley below and flattening the villages in its path.

The tsunami displaced the air with a force supposedly more powerful than the atomic bomb dropped on Hiroshima. Victims were found with their clothes blown clean off, their skin damaged and their internal organs ravaged by the force of the blast. The few survivors described hearing what sounded like a large thunderclap, followed around a minute later by a deafening, growing crash.

But witness accounts are hard to come by, since most people in the line of impact died, around 80 percent of them in a handful of villages along the valley floor: Longarone, Pirago, Rivalta, Villanova and Faè. Some 350 families were wiped out altogether. Villages up in the mountains, on the shore of the artificial lake, also suffered losses. In total 1,910 victims were confirmed, though the true figure is probably higher. The Piave Valley was turned into a flattened moonscape – with one exception, the Vajont Dam. The structure hailed as the world's tallest dam at the time of its completion, survived the tsunami and remains standing to this day. Undertaken in the post-war boom that saw Italy undertake a raft of ambitious infrastructure projects, including Genoa's fateful Morandi Bridge, the hydroelectric dam was built despite warnings that the mountain above it, Monte Toc, was unstable. Their concession was to lower the water level in the reservoir behind the dam as a landslide began to seem inevitable, though some experts have said that drawing down the water, combined with heavy rain, may actually have helped trigger the fatal collapse. A photo taken after the disaster shows landfall filling what used to be the reservoir. Photo: US Army – public domain, Wikimedia

Even after the disaster, the authorities resisted admitting responsibility, arguing that the landslide was an unforeseeable 'act of god'. It would take many years before the tragedy was recognized publicly for what it was: “a classic example of the consequences of the failure of engineers and geologists to understand the nature of the problem that they were trying to deal with”, as Unesco described it in 2008. The memorial church at Longarone. Photo: Dage – Looking for Europe, CC BY 2.0, Flickr Its upper deck overlooks the Vajont Dam, no longer in use but still in place. Since 2002 the public has been allowed to visit, with guides offering tours and the chance to walk along the top of the dam. There is also a visitor centre in Erto, one of the mountain villages damaged in the disaster. Where once the vast reservoir reached to its shores, now the basin has been almost entirely drained, filled with the rocks and earth that fell from Monte Toc that fateful night. A view over the Vajont Dam today. Photo: Nadia Clabassi – CC BY 2.0, Flickr