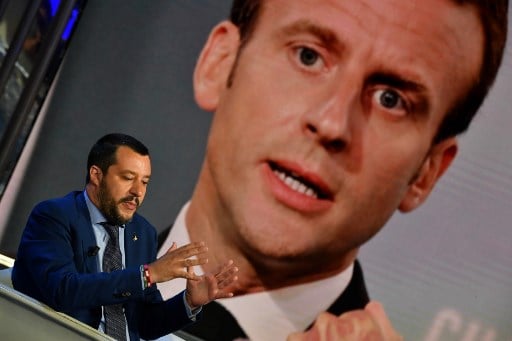 Salvini gestures speaks during the Italian talk show "Porta a Porta" in June 2 2018, as a picture of French President Macron is seen in the background. Photo: Andreas Solaro/AFP

The remarks came as international interior ministers met to discuss the migrant crisis in the French city of Lyon, where EU members sought common ground.

“I don't understand why Macron accuses me of racism or egotism because today all the ministers around the table agreed that economic migrants can't be welcomed in Europe,” Salvini told reporters.

The 45-year-old leader, who heads the far-right League party, has engaged in an open war of words with Macron sparked by Italy's decision to close its ports to charity rescue boats in the Mediterranean.

Macron accused Salvini of “cynicism and irresponsibility” in June and an aide said last week that the new populist government was “living off” the crisis.

The two leaders are positioning themselves ahead of European parliament elections next year, with hardliners like Salvini in one corner and Macron and other centrists endorsing deeper EU integration in the other.

When it was pointed out to Salvini that Macron too wanted to reduce the flow of arrivals from Africa to Europe, he suggested they might eventually see eye to eye.

“If Macron is on the same line, then we are fighting the same battle,” he said. “Perhaps from time to time he could open the border at Ventimiglia (between France and Italy) and stop insulting us,” he added.

The European Union is riven by tensions over immigration, with many countries refusing to take in any refugees, while attempts to roll out a beefed-up EU border force have also hit snags.

“There's no confrontation, there are simply positions that we are trying to… forge into a consensus and find common ground, which is needed in the European Union,” Spanish Interior Minister Fernando Grande-Marlaska said.

In a sign of the widely diverging views, Poland's Interior Minister Joachim Brudzinski announced at the end of the meeting that he would recommend that Warsaw quit a landmark UN charter on migration.

Hungary has already abandoned the charter, but it is set to be signed by the rest of the EU at a December summit in Morocco.

On Monday night over dinner, Brudzinski disappointed some of his counterparts by talking about a “migrant invasion” during his comments, one participant told AFP on condition of anonymity.