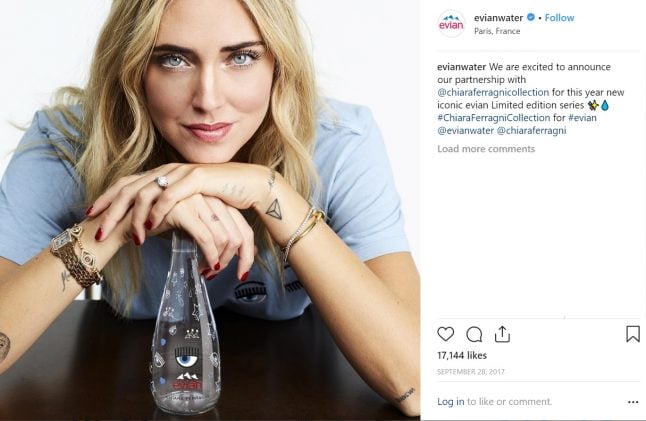 The limited edition bottles, designed by Ferragni, feature mountains beneath the stars, a star in a stream, love hearts, and water droplets, and are an “ode to the freedom and youth of the spirit” and “exude the joy for life that is the hallmark of Chiara Ferragni,” according to the bottle’s description on the website aquedilusso.it (“luxury waters”).

“…Chiara Ferragni Limited Edition Evian Water, 8€ a bottle… the end of the world is near,” joked one Twitter user who saw the bottles on sale in a shop.

Some expressed genuine indignation at the sales campaign.

“Today I saw the Chiara Ferragni limited edition Evian water bottle” wrote a woman going by the name of Stefania Stravato, who juxtaposed a photograph of the bottle with that of a family on a rubbish heap in India.

“This is an Indian woman with her children rummaging through trash in a rubbish dump near Gurwahati, in India. Yes, it’s banal to say it. But how much this world sucks.”

Others took a more ironic approach.

“Can you buy it using universal basic income?” wrote one person, alluding to the Five Star Movement’s flagship campaign to introduce the alternative benefits system to Italy, included in the government's new budget.

Others defended Ferragni, pointing out that Evian water has always been expensive, and the social media influencer's fans rallied behind her.

“Given the pointless controversy about the Evian water, today I put on my Chiara Ferragni shirt, which I bought because I wanted to and which no one forced me to buy, just as is the case for you and that damn bottle” wrote one girl.

But despite the negative response to the campaign from some members of the public, the bottles' sales appeared unaffected.

Twelve packs of the bottle, going for €72.50, have already sold out on Acqua di Lusso, according to Il Messagero.