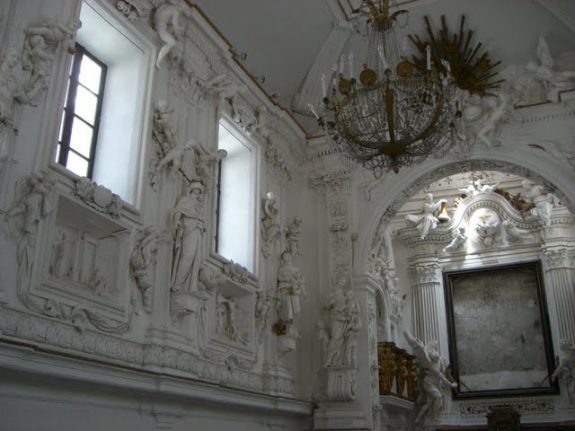 The oratory of San Lorenzo, Palermo, showing the space where the painting once hung. Photo: Wikimedia Commons

The Vatican called a meeting of experts in Rome today to discuss new developments in the search for the stolen Nativity with San Lorenzo and San Francesco, a priceless Caravaggio painting stolen from a Palermo church 49 years ago.

The theft of the Nativity takes second place on the FBI’s list of the top ten unsolved art crimes, and the lost painting is often described as the world’s “most wanted.”

The painting depicts Mary gazing at the newborn baby Jesus. It hung in the Oratory of San Lorenzo in Palermo, Sicily, until it was cut from its frame one stormy night in October 1969 by thieves using razor blades or box-cutters.

The theft happened the day after the painting was mentioned on a TV show about 'forgotten art treasures', Ansa writes.

Since its disappearance in 1969 the artwork’s fate has remained a mystery, the story of the as yet unsuccessful search has been filled with intrigue, espionage and allegations of mafia involvement. Caravaggio's Nativity with San Lorenzo and San Francesco, also known as The Adoration.

The painting was at first thought to have been destroyed shortly after it disappeared. For years, it was thought that the Nativity might have been damaged beyond repair after being stored in a barn in the Sicilian countryside.

Despite this, investigators, both local and international, never gave up searching for the lost painting.

Past leads all led to dead ends. Earlier this year, mafia turncoat Gaetano Grado led investigators to believe the painting may have been smuggled to Switzerland, where he claimed it was cut into smaller pieces by a Swiss art dealer to make it easier to sell on behalf of the mafia.

But investigators now say they believe the Nativity is actually still intact and have hinted at its possible whereabouts.

Police investigators specialised in hunting down stolen art have found traces of the work and are convinced it’s still in one piece, Colonel Fernando Musella of the Carabinieri told a press conference on Friday.

Investigators have recently visited an unspecified city in Eastern Europe in connection with their enquiries, he added, hinting that there could yet be a happy ending to the story.

It appears that the recent investigations have disproved the claims of the repentant mafioso, as well as others before him, finding that he’d got it confused with another painting stolen from a Palermo church a year later.

“Many repentant mafia have talked about the theft of this masterpiece, each one providing a different version,” Philosopher Vittorio V. Alberti, one of the meeting’s organisers, told local media today.

The painting has become “a symbol of the fight against the mafia,” a Vatican spokesperson stated, adding that the meeting aimed to “reiterate the opposition to the mafia on the part of the Church” and get the search for the painting back into the public eye.

Alberti described the theft as a “civil and moral wound” that affects the whole of society.

“Organised crime has repeatedly attacked religious and cultural symbols. This painting is a symbol, an element of property, in quotation marks, of the church, but it’s a work that speaks to everyone,” he said.

Caravaggio is believed to have painted the Nativity in 1609, just one year before his death in Porto Ercole, Tuscany. The hell-raising artist was just 38 when he died.

He’d fled Rome after murdering a man in a fight over gambling debt, and spent the rest of his days on the run, passing through Naples and Malta before arriving in Sicily.

Today a high-quality copy of the Nativity, produced by an art laboratory in 2015, hangs in place of the original artwork above the altar in the Oratory of San Lorenzo.