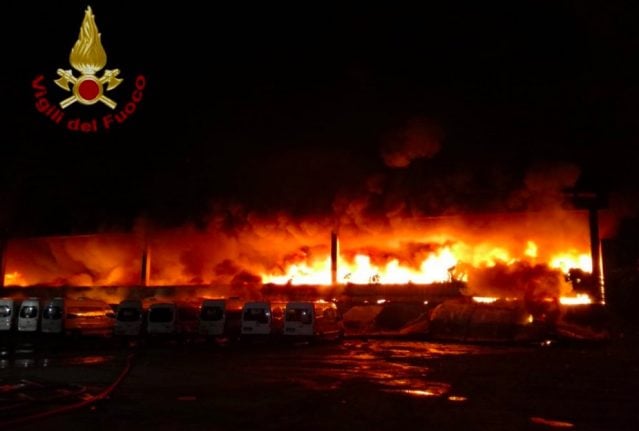 The blaze broke out at around 8:30 pm on Sunday night in Via Dante Chiasserini, a street in the north-east of Milan.

The flames reached up to 40 metres high, reports said, as 13 teams of firefighters battled all night to get them under control. The smoke could be seen from several kilometres away.

No one was seriously hurt, though at least one person suffered from minor injuries. As well as the recycling centre, a nearby minibus depot suffered damage and the Milan-Novara train line, which runs through the area, had to halt its services.

The line remained closed on Monday morning and around 40 firefighters were still on the scene, Italy's fire service said.

On the advice of environmental safety experts, the city council warned residents to take the precaution of keeping their windows closed throughout Thursday, especially those immediately to the west of the fire.

According to Milano Today, it is the 17th fire of its kind in Lombardy this year. In 2017, the region saw 21 rubbish fires.

Fires at waste stockage centres have become more frequent since China stopped taking in other countries' trash earlier this year, leaving Italy with more rubbish than it can dispose of, Repubblica says.

Last week six people were arrested in the town of Corteleona, south of Milan, on charges of illegally stocking industrial plastic waste and then burning it, releasing hazardous smoke.

Italy's most infamous cases of toxic waste pollution to date took place in the southern region of Campania, nicknamed “the Land of Fires” due to the thousands of fires that broke out there each year because of illegal dumping. The Camorra crime syndicate was deeply implicated in the problem, which was found to be linked to a spike in cancer rates.